THE NORTH OF SCOTLAND CASTLE TRAIL

There are so many castles in Northern Scotland that there's a 'Castle Trail'!  Be inspired by castles that would be amazing settings for your ceremony of marriage or vow renewal.

The idea of getting married in a castle is universally appealing and Scotland has some very well known castles which have been featured in Hollywood film productions and TV series.  Scotland also has some amazing ruins, as well as some secret spots that not many people know about, as well as self catering castles that you can hire and enjoy a unique blend of history and romance, coupled with modern plumbing and heating!

For photos at a ruined 13th century castle overlooking water we love the stunning and iconic Urquhart Castle overlooking Loch Ness, just outside Drumnadrochit near Inverness.  (picture below) 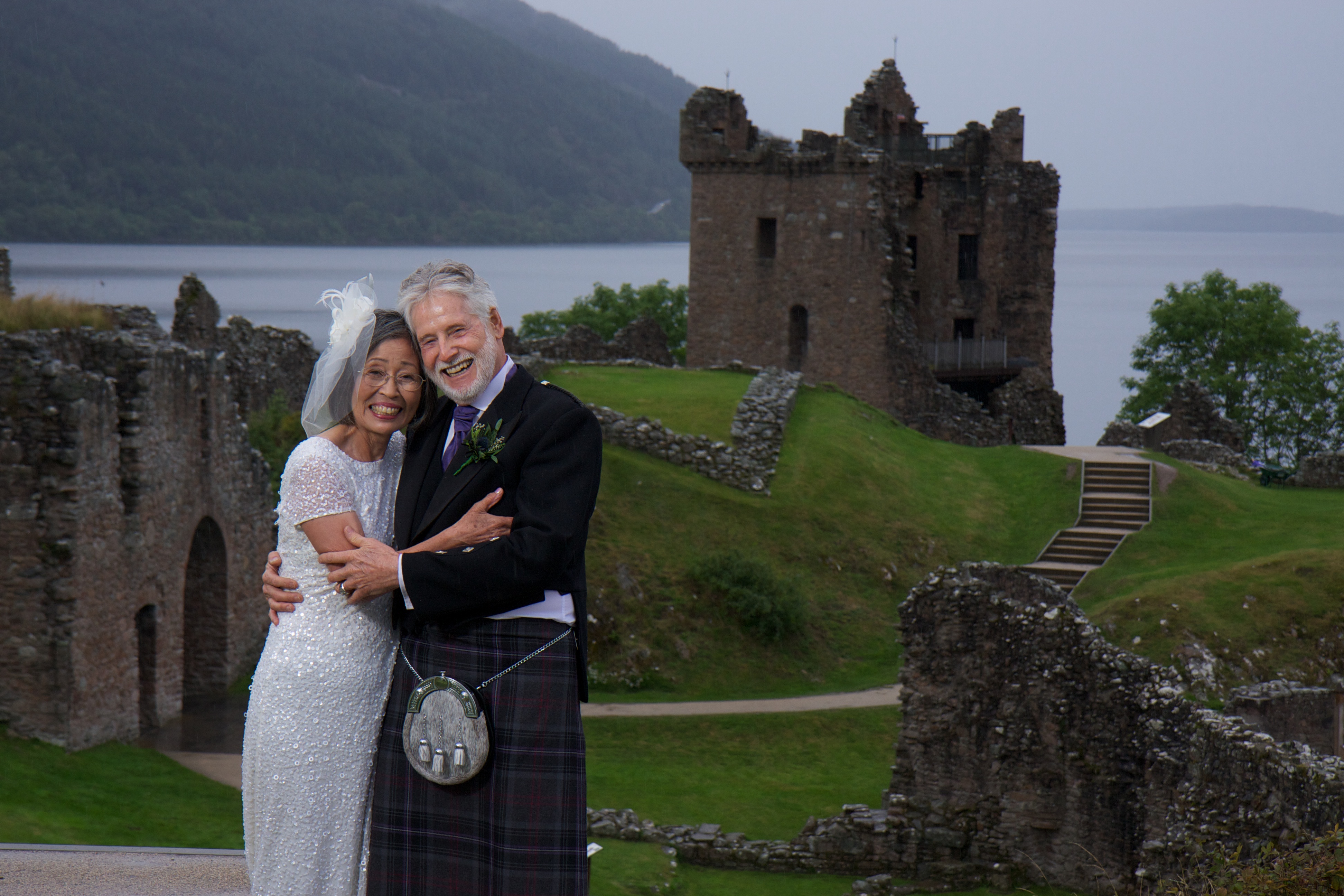 But if you would like your ceremony and photos in one place, we also love the prominent and dramatic location of the medieval Dunnottar Castle overlooking the North Sea, near Stonehaven just south of Aberdeen.

Eilean Donan is a 13th century castle on the outskirts of the village of Dornie near Kyle of Lochalsch.  It overlooks the meeting point of Loch Duich, Loch Alsh and Loch Long and is purported to be one of Scotland’s most photographed castle along with Kilchurn Castle.  We are looking at holding ceremonies at both iconic locations this year.  (bottom picture on this page)

Near Beauly, Castle Leod, seat of Clan Mackenzie, is a small, unspoilt castle. The present Laird, John Mackenzie, Earl of Cromartie, hosts small weddings as well as giving fascinating tours for fans of the Outlander books and TV series – the castle inspired Diana Gabaldon’s idea of Castle Leoch, the fictional seat of Clan Mackenzie.  You can stay in a cottage in the castle grounds, and this year you will be able to hire an apartment actually in the castle.

For small self catering castles you can’t beat Muckrach Castle near Grantown on Spey, and Forter Castle in Glenisla which has its own tiny chapel.

Delgatie Castle near Turriff also had a chapel and the option of staying in rooms within the castle when you get married there. 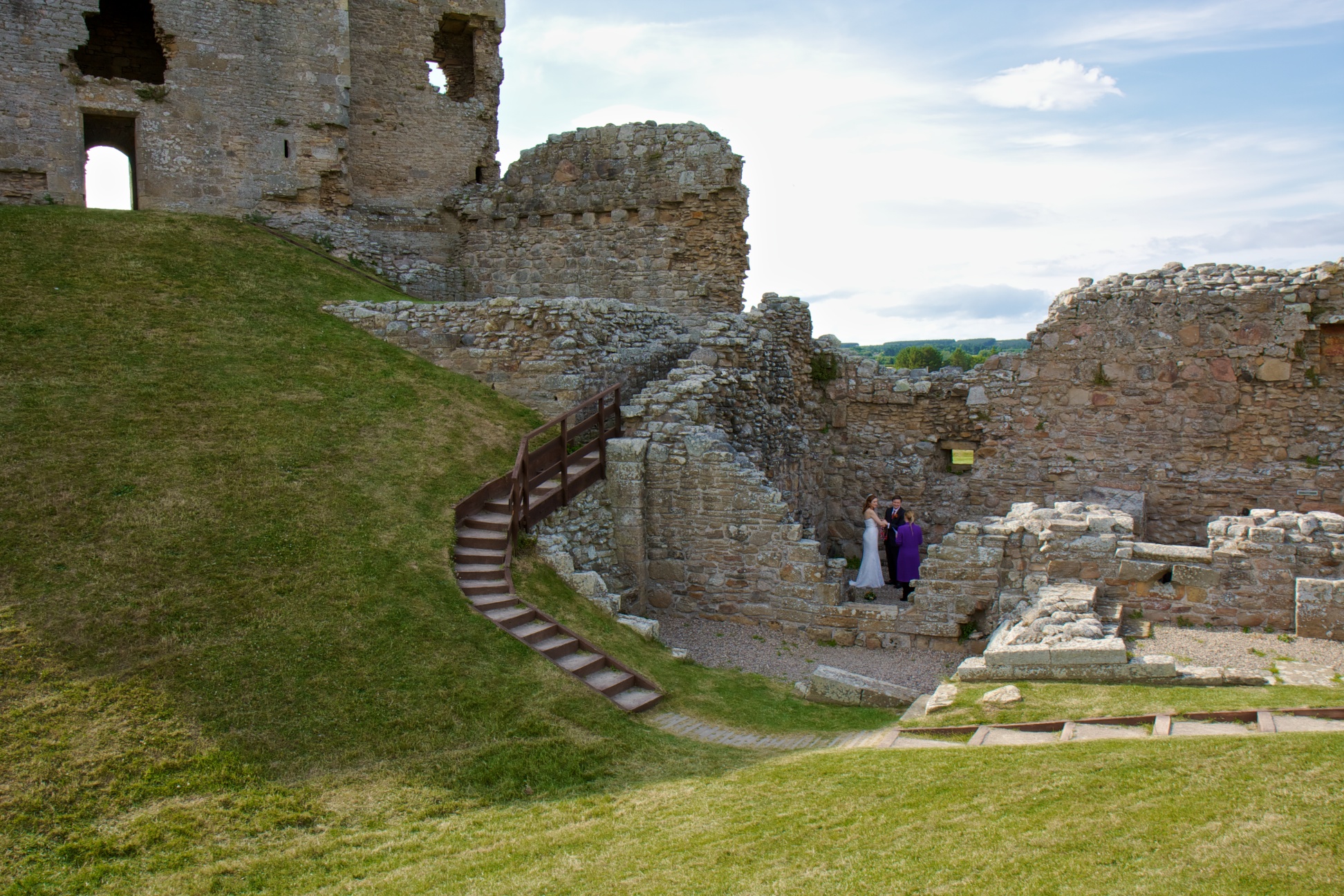 16th century Brodie Castle, in Moray, offers an elegant solution to every conceivable possibility for your ceremony and reception, large or small. You can stay in the castle in the Laird’s Wing, or in one of the holiday cottages on the estate.  You can marry in the Drawing Room or the Library, or outside in the shrubbery.  You can have a marquee on the lawn for your reception and/or ceremony, or hire The Stables for your ceremony, reception, or both.

WEDDINGS NEAR CASTLES WITH WATER

The ruins of Lochindorb Castle are set in a small freshwater lake half an hour from Forres on the Dava Moor, and near Aviemore Loch an Eilein surrounds a small ruined 15th century castle. Whilst you cannot hold a ceremony actually in either of these ruins, they still make for very picturesque backdrops for your loch side ceremony. 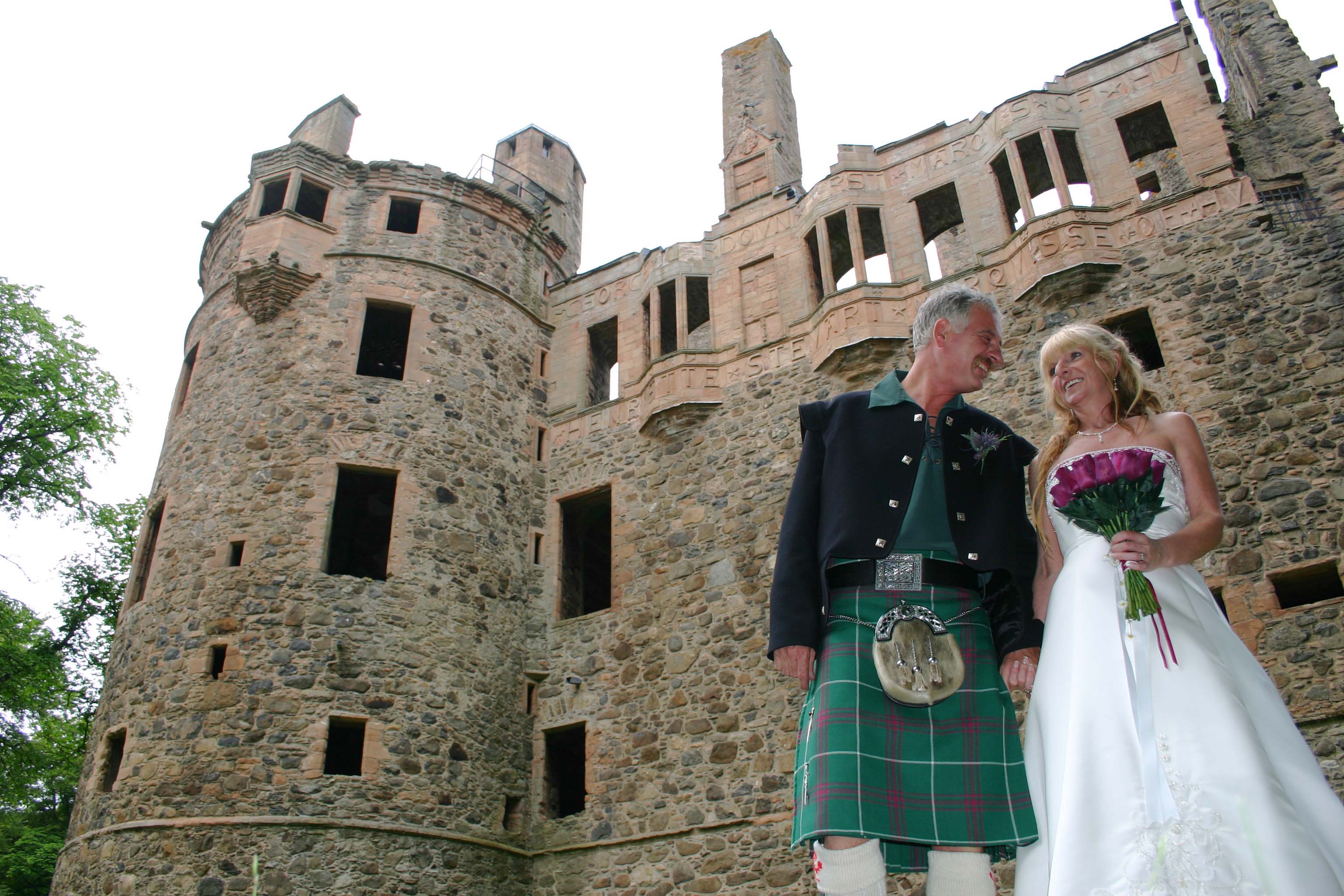 Old Inverlochy Castle ruins are close to Fort William and set beside the river Lochy, just up the road from the luxury 5* hotel Victorian Inverlochy Castle Hotel. Another beautiful ruin, Duffus Castle near the village of Duffus, is set up high offering a 360 degree view of the surrounding countryside.  And half an hour in the other direction from us is the ruined hall house chapel, our secret castle, with a view over to The Black Isle.

Glengarry Castle ruins a few miles from Fort Augustus overlooking Loch Oich and Redcastle ruins on The Black Isle overlooking the Beauly Firth are both currently surrounded by scaffolding and keep out notices, but they can still provide the backdrop for your photos.