WONDERING HOW TO ELOPE TO SCOTLAND IN 2021?

Weddings for two and elopements in the North of Scotland are our speciality and here is an account of another fabulous real life occasion from 2020 to inspire you.

Emma and Alister travelled to The Highlands from Fife for their elopement with us, and were kind enough to say “Our experience exceeded our very high expectations and we have no regrets at all.”

After becoming engaged during the 2019 festive season Emma and Alister began 2020 by enquiring about a wedding for two in the North of Scotland.  As they were both teachers their idea was to have a low key and leisurely ceremony midweek during the October half term break – we thought that sounded like a great idea and were delighted to help in any way needed!  And thankfully their plans didn't have to change in any way, despite Covid - amazing! 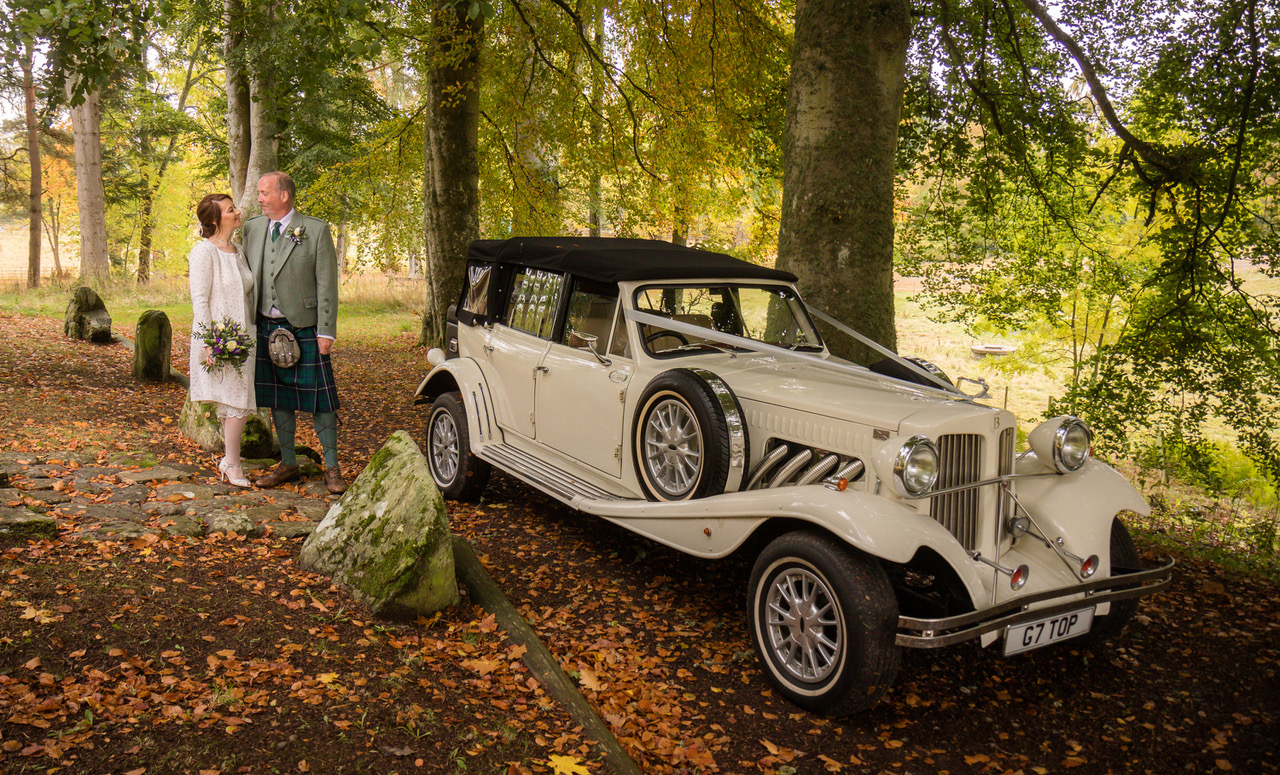 They were drawn to have their ceremony at Belladrum Temple near Beauly, and were thinking of treating themselves to a short but luxurious stay at the elegant Coul House Hotel in Contin which offers a warm welcome and comfortable stay as well as fine dining. 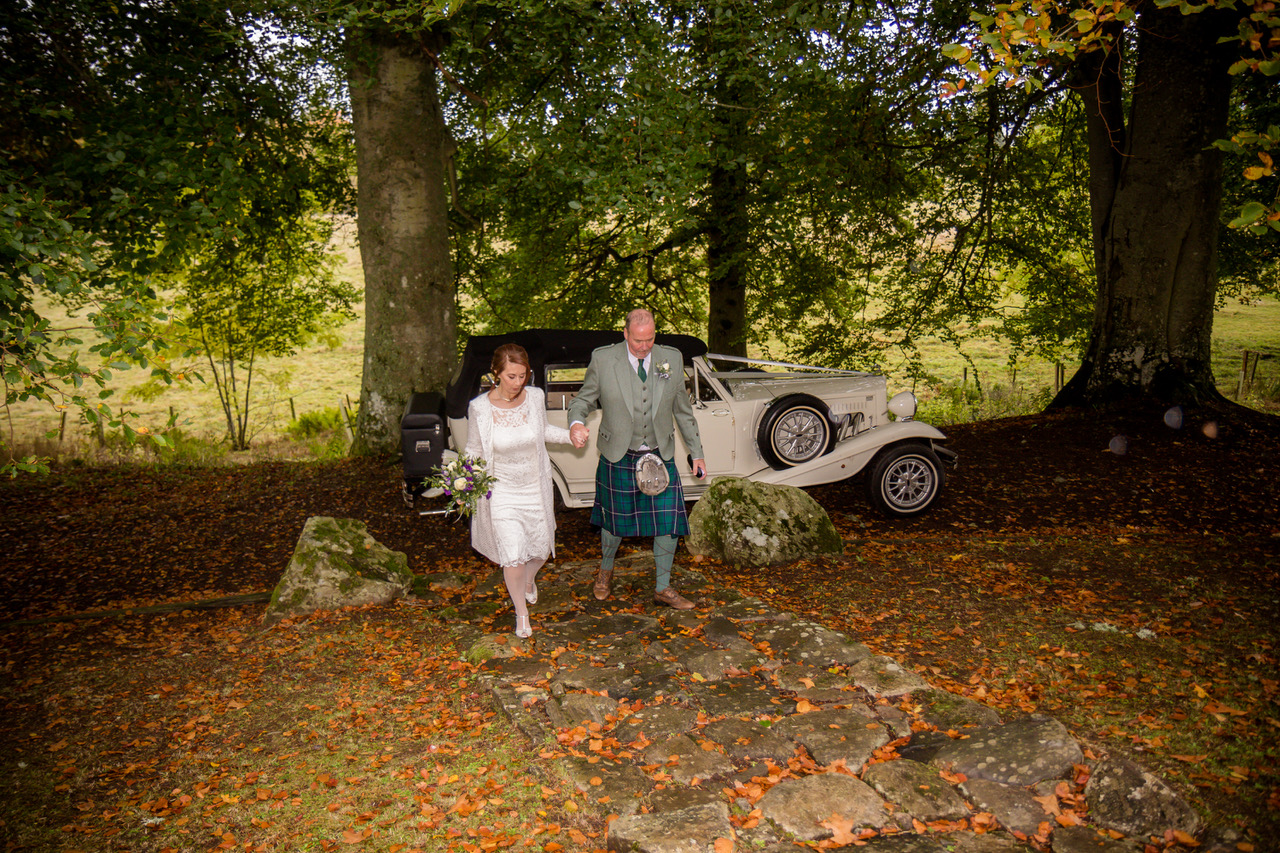 A PERSONALISED CEREMONY AND SERVICE

Emma remembers, “We started off looking for a wee wedding in a small venue, and when we came across the Getting Married In Scotland website it matched what we were thinking of. The examples of weddings for two on the website with the amazing photography showed us that our ideas could be made into reality as Angie and Will had clearly done weddings for two before!  We also wanted a personalised service and ceremony to reflect our ideas and beliefs - something that the website also demonstrated was feasible, as did the initial discussions with Angie and some of the ideas she presented.” 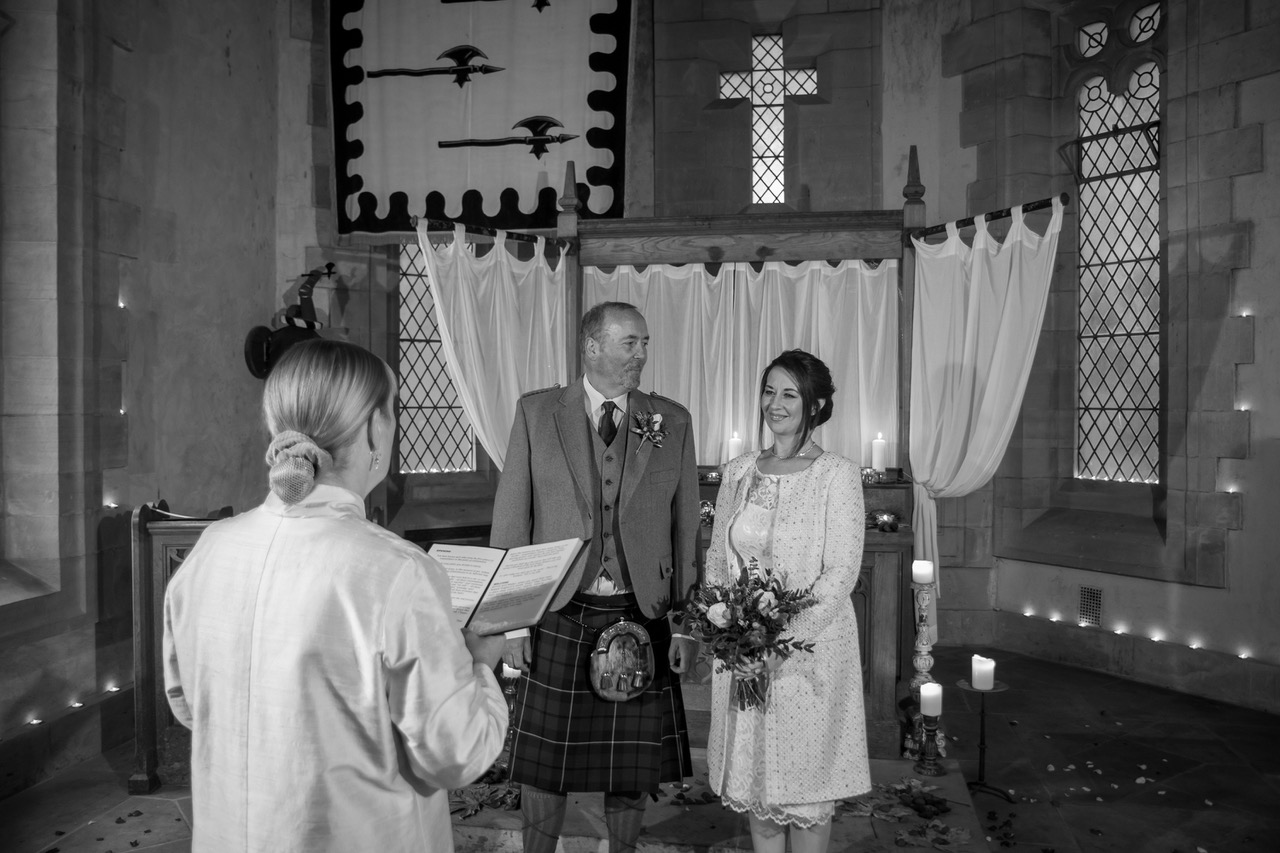 We love to recommend Belladrum Temple as a very special and unique place for a wee wedding.  The Belladrum Estate is possibly best known for hosting the annual Tartan Heart family music festival, but for the other 11 months of the year, Belladrum Temple is the most perfect indoor setting for an elopement or wedding for two. 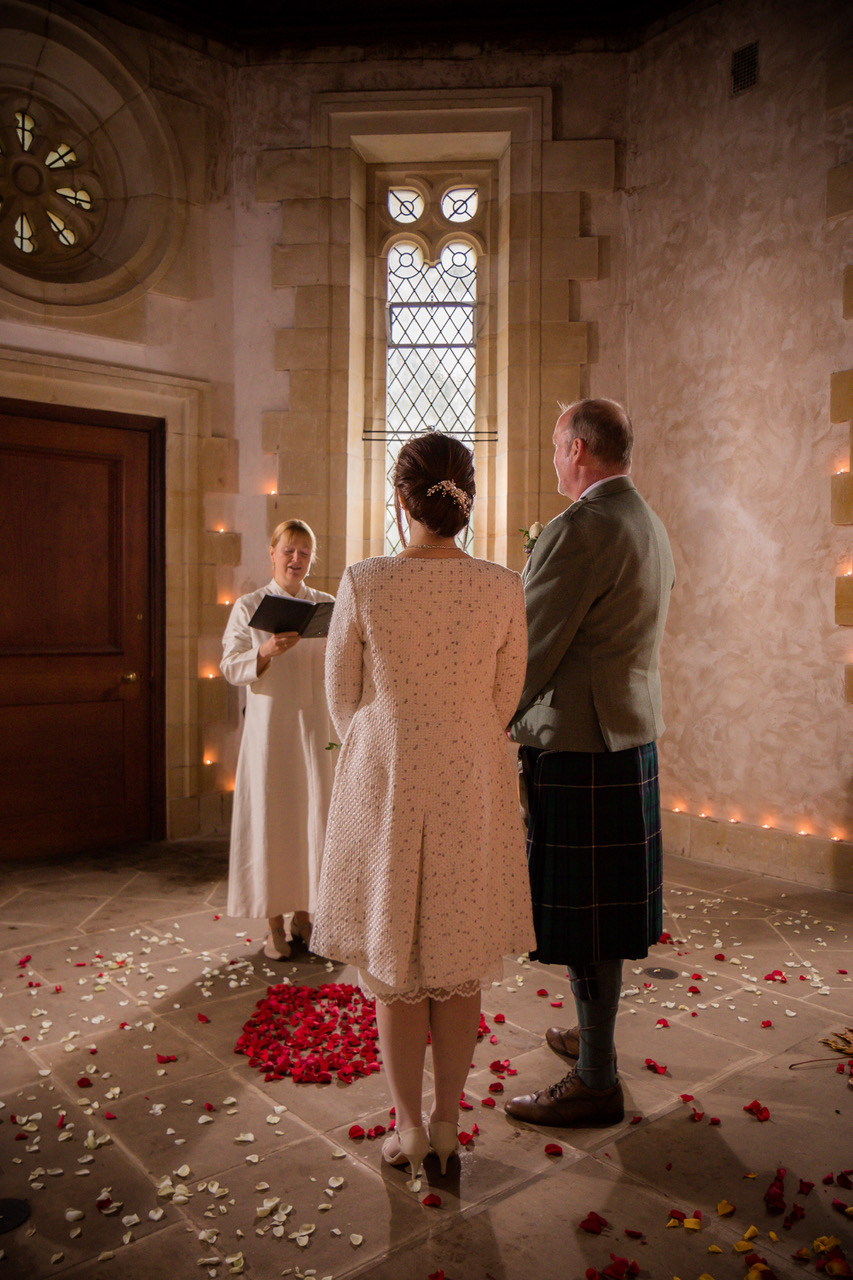 The unusual stone temple was designed and built in the 1930s and is octagonal.  It has no electricity or toilet facilities, but it does have a portable gas heater to make the space cosy, and we always offer to bring along a portable battery operated music system.  In such an age of health and safety restrictions to have a venue where the use of real candles is permitted and positively encouraged is very welcome and the Temple turns from a lovely location to a really special location when it’s candle lit. 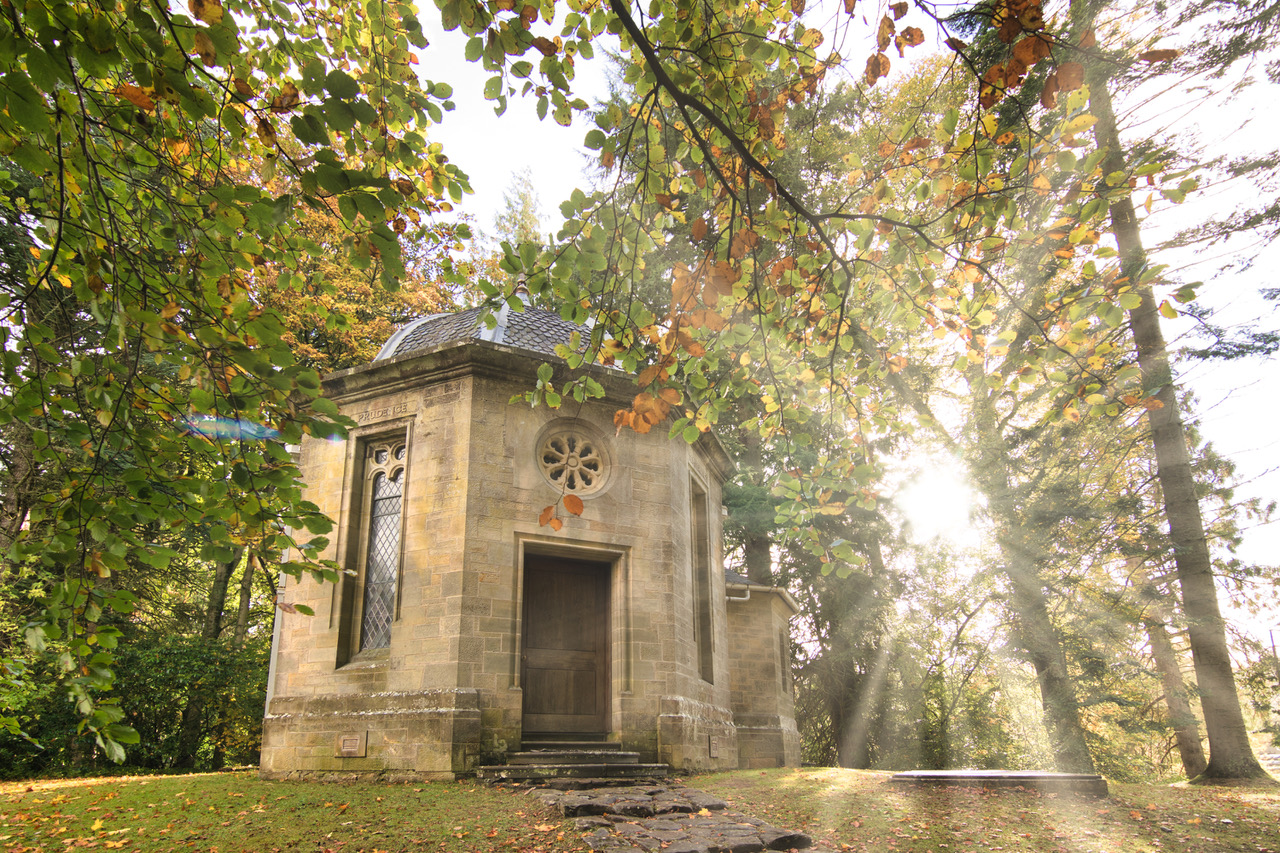 Emma and Alister made their booking six months ahead of visiting the Temple for the first time in July 2020. Emma said, “When we arrived we both felt overwhelmed and excited as the setting was so beautiful and tranquil. The Temple was so different and distinct as a venue and we were both absolutely certain that we'd picked the perfect place for us to get married.” 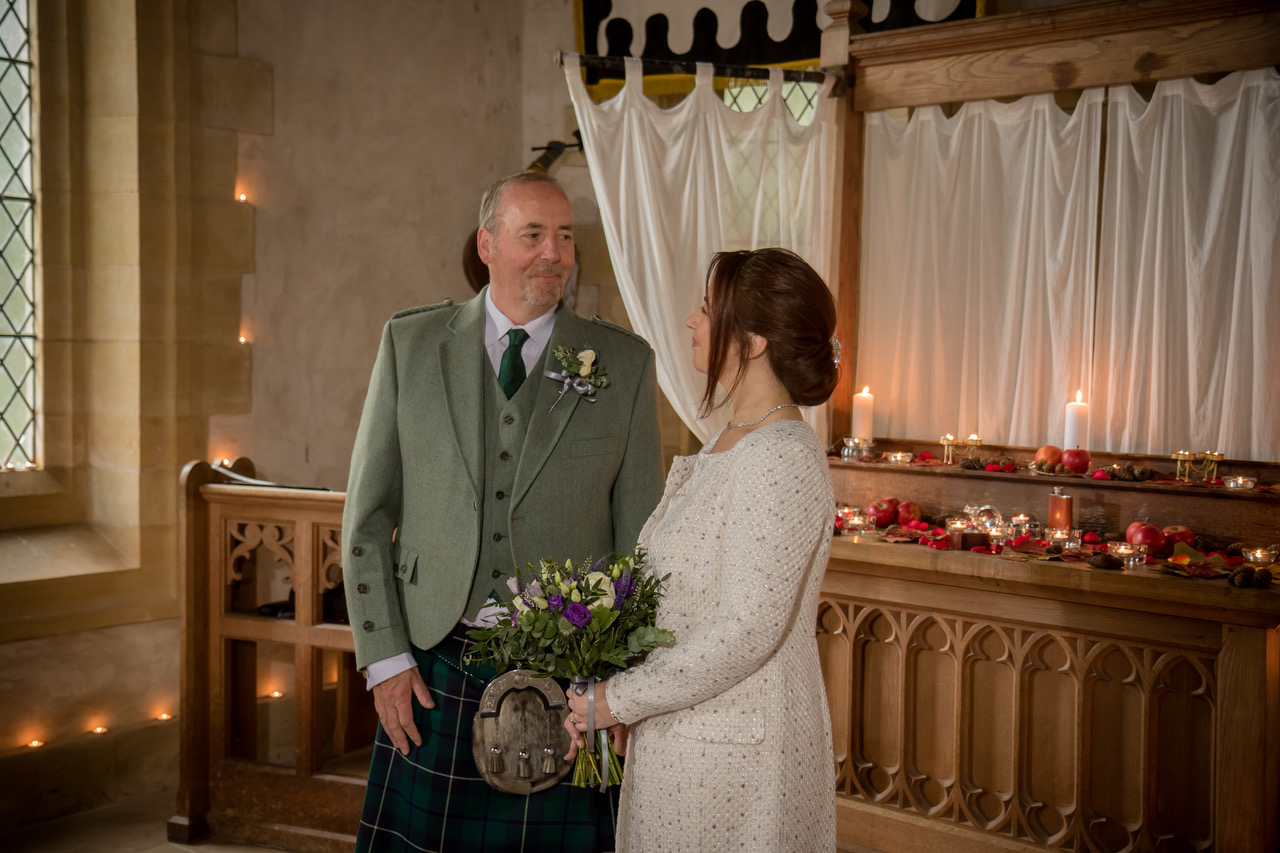 And whilst the title ‘Temple’ might conjure up religious connotations, just to clarify, the Temple is available for any kind of ceremony – religious, spiritual, non religious, humanist, so there are no particular criteria you have to adhere to to be allowed to get married there other than making the usual, simple, advance legal application. Emma and Alister were able to enjoy complete flexibility with the content and format of their personal wedding ceremony. 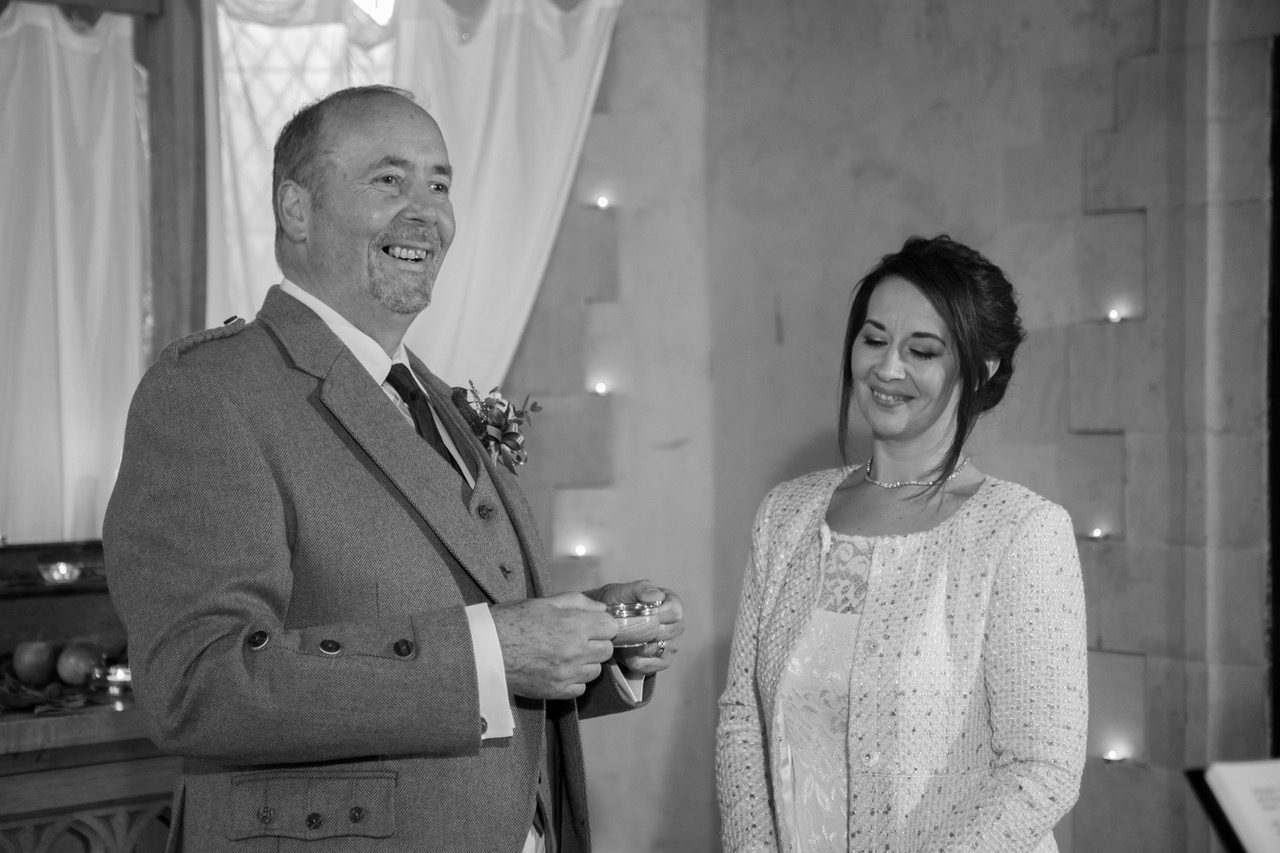 Many couples having a ceremony on their own need a little bit of help with some extras – as they’ll be just the two of them and there’s no-one else to call on, we offer to help with anything in the way of pampering or practical help.  I was able to help prepare the Temple with an autumn theme for Emma and Alister using cones, leaves and apples, and of course lots of candles – around 200 - which together created a seasonal and colourful, romantic and peaceful atmosphere.  Even with good quality photos it’s hard to capture the magic that the Temple has once dressed for a ceremony. 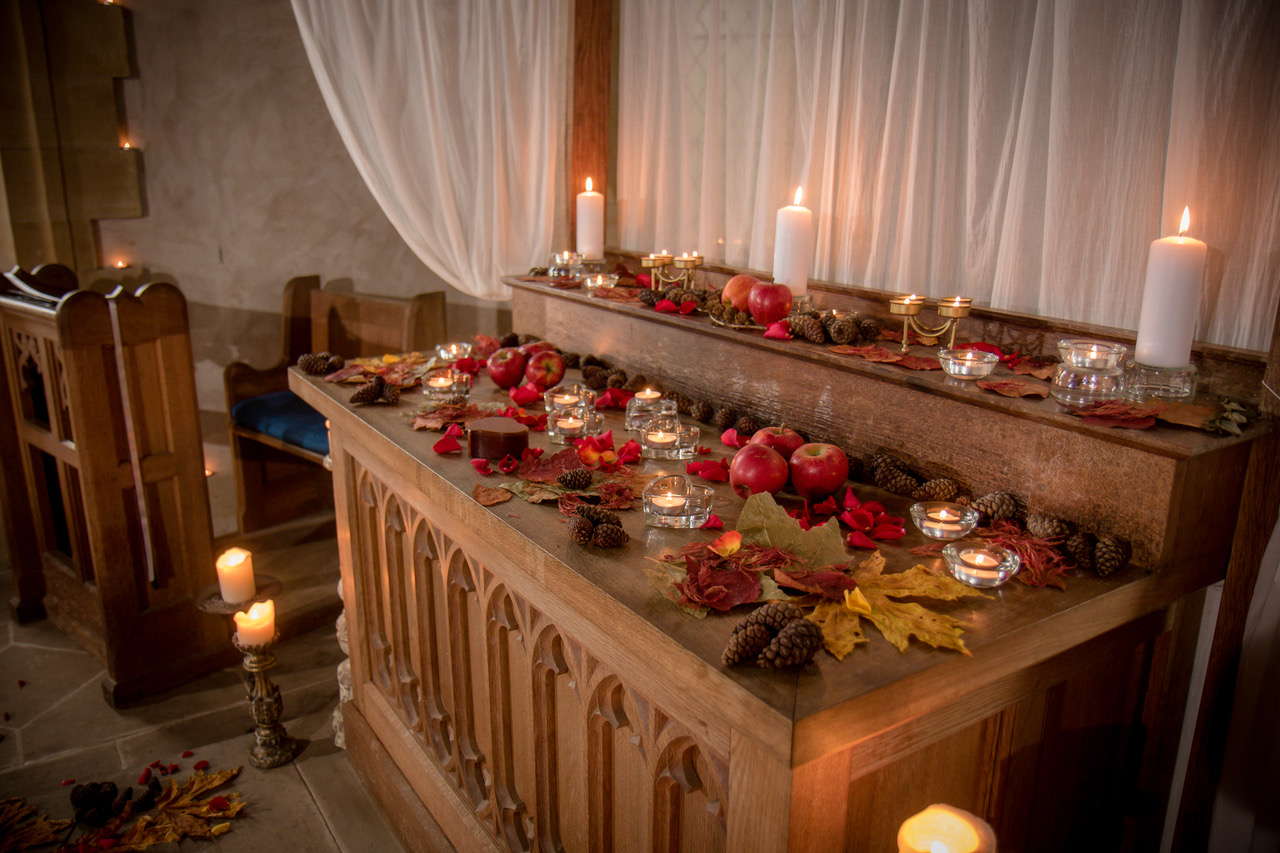 On Emma and Alister’s special day Will was on board to take photographs of the ceremony and around the location as well as act as first legal witness.  George from Top Class cars in Inverness drove Emma and Alister in one of his gorgeous vintage cars, and also kindly acted as second legal witness, so we were a cosy and intimate group of just five in total. 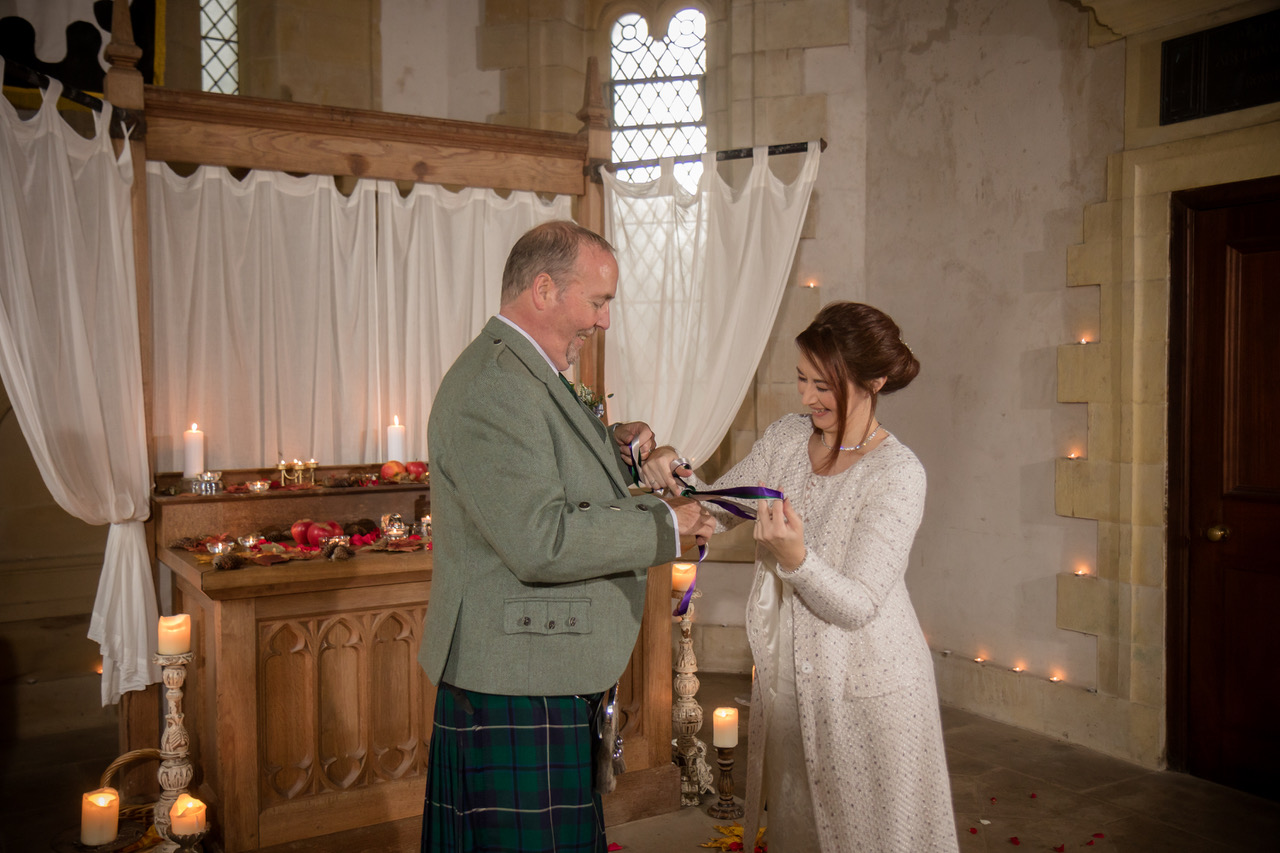 A PERSONAL AND CELTIC CEREMONY

Emma and Alister both took a very active part in carefully considering every aspect of their ceremony including music to begin and end, as well as what of their story so far they wanted to acknowledge in the wedding address.  They chose to include a reading which spoke to them about marriage, as well as a shortened version of the fabulous Celtic Declarations of Intent vows which worked beautifully with a three ribbon handfasting.  An exchange of rings followed very simple legal vows, leading up to a Celtic blessing with a toast from the quaich to finish.  The ceremony was simple, meaningful, personal and relaxed, as were the photos which followed, and the weather was kind enough for us to take photos outside after they had been declared Mr and Mrs :) 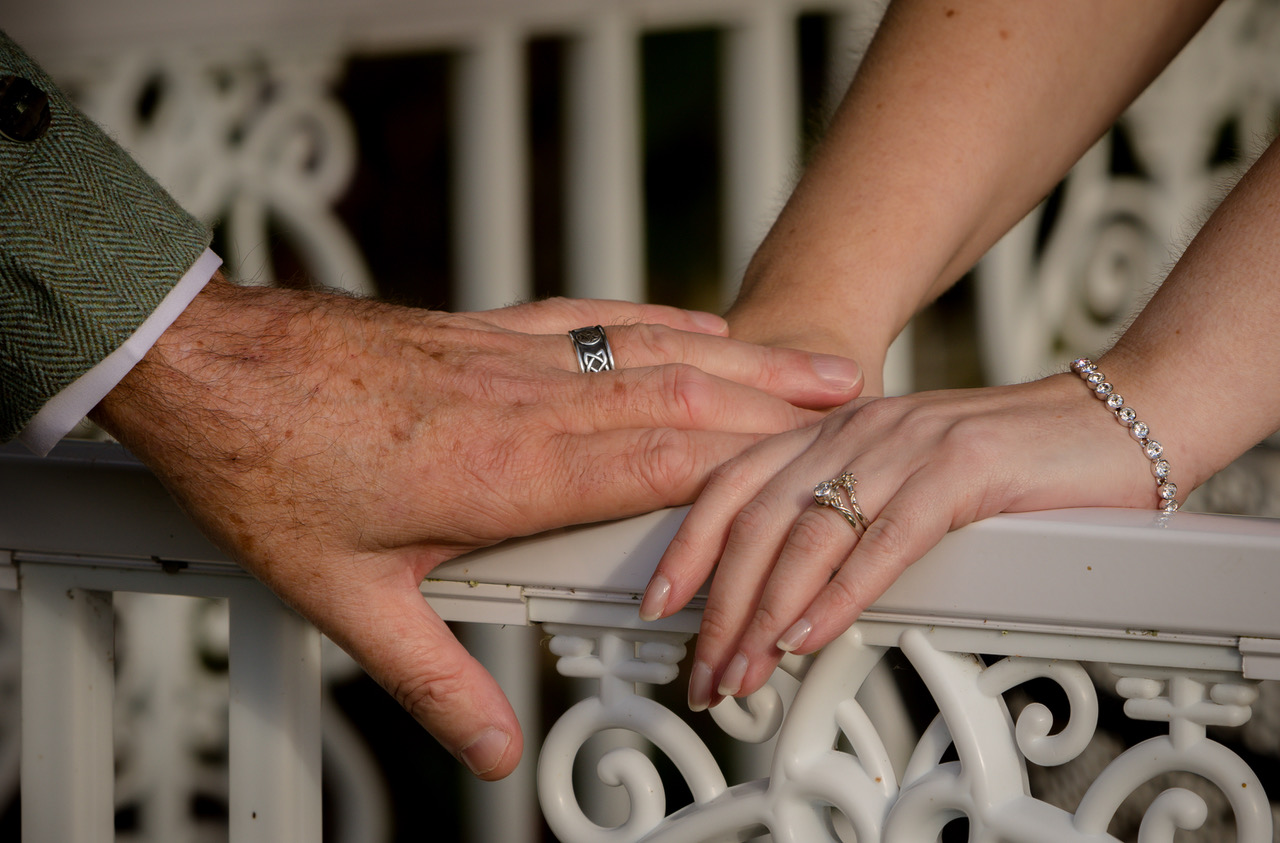 CHOOSE 'JUST THE TWO OF US'

The ceremony and the day were tailored to Emma and Alister who couldn’t have been happier when they looked back saying “It felt really fantastic to be able to just focus on each other and to not be distracted by the multiple other 'issues' that often rear their head on a wedding day. We both felt as though we were in a bubble and had no real sense of the time passing.  Weddings are often described as being like a 'blur' for the couple but we had no sense of this at all.  Just having the two of us totally changed the pace of the day and allowed us to enjoy and remember every moment.” 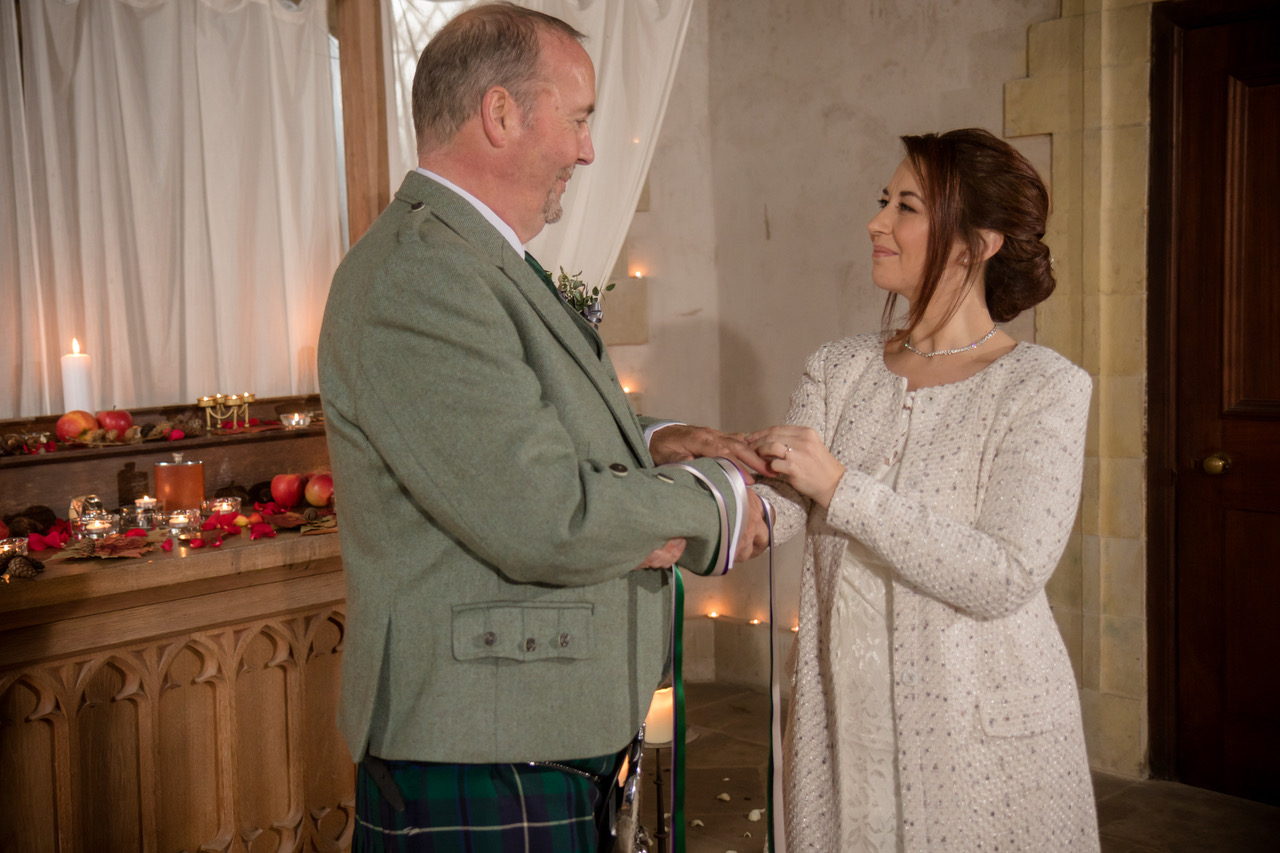 We followed Emma and Alister back to the hotel after the ceremony to take photos in the grounds of Coul House which has many beautiful mature trees, and what a joy to discover the Giant Sequoia and Fairy Trail through the rhododendrons - and enjoy a bit of blue sky! 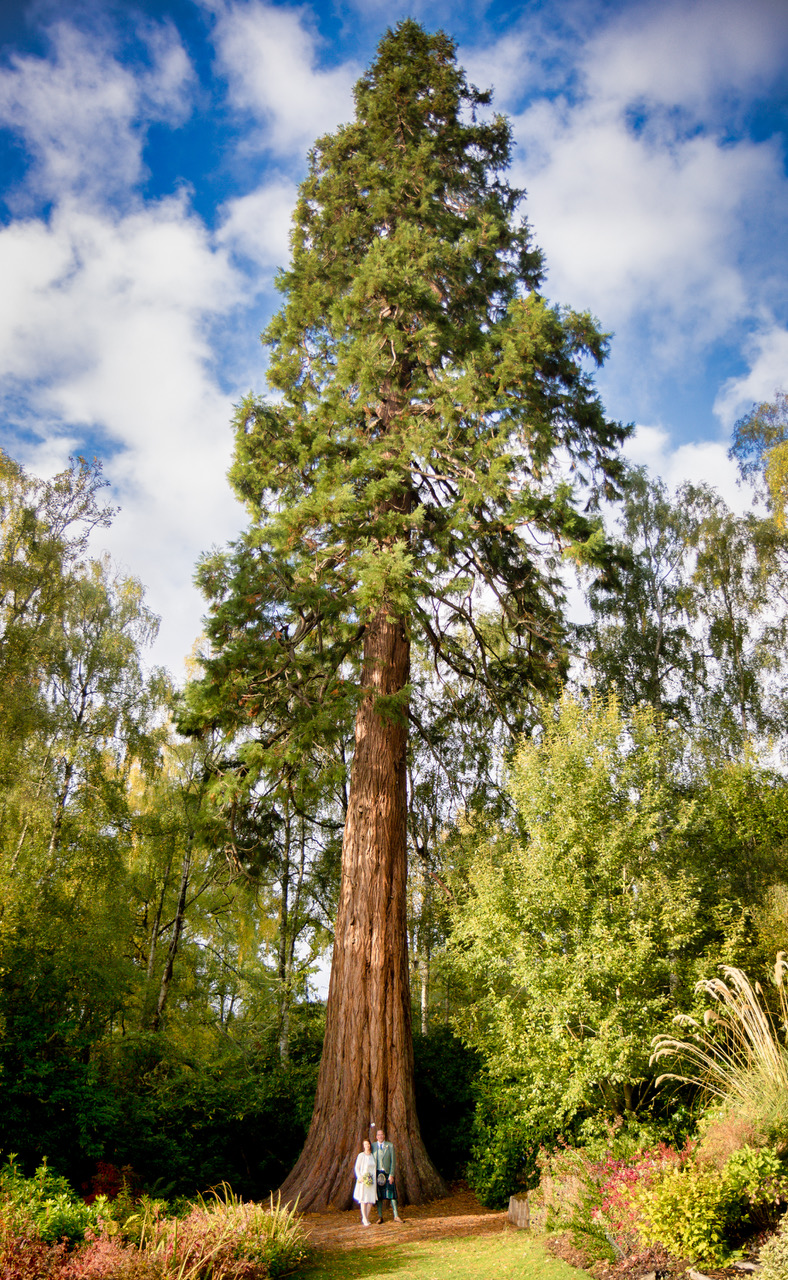 HAVING RESERVATIONS ABOUT ELOPING?

I often wonder if couples have any reservations about booking a wee wedding for two especially when they have never met Will or I, and they are often choosing a location they have never visited before.  I asked Emma and Alister how they felt about their choices looking back and they enthused, “We had no reservations about a wedding for two as we'd both discussed it a lot and were really certain that we wanted a day where we could focus solely on each other. This is exactly what happened on our wedding day and reconfirms that we made the right decisions for us.  Everything you both did was amazing and we have to say that everything exceeded our expectations and even our hopes! We are so glad that we approached you and Will as you both really made it a special day.” 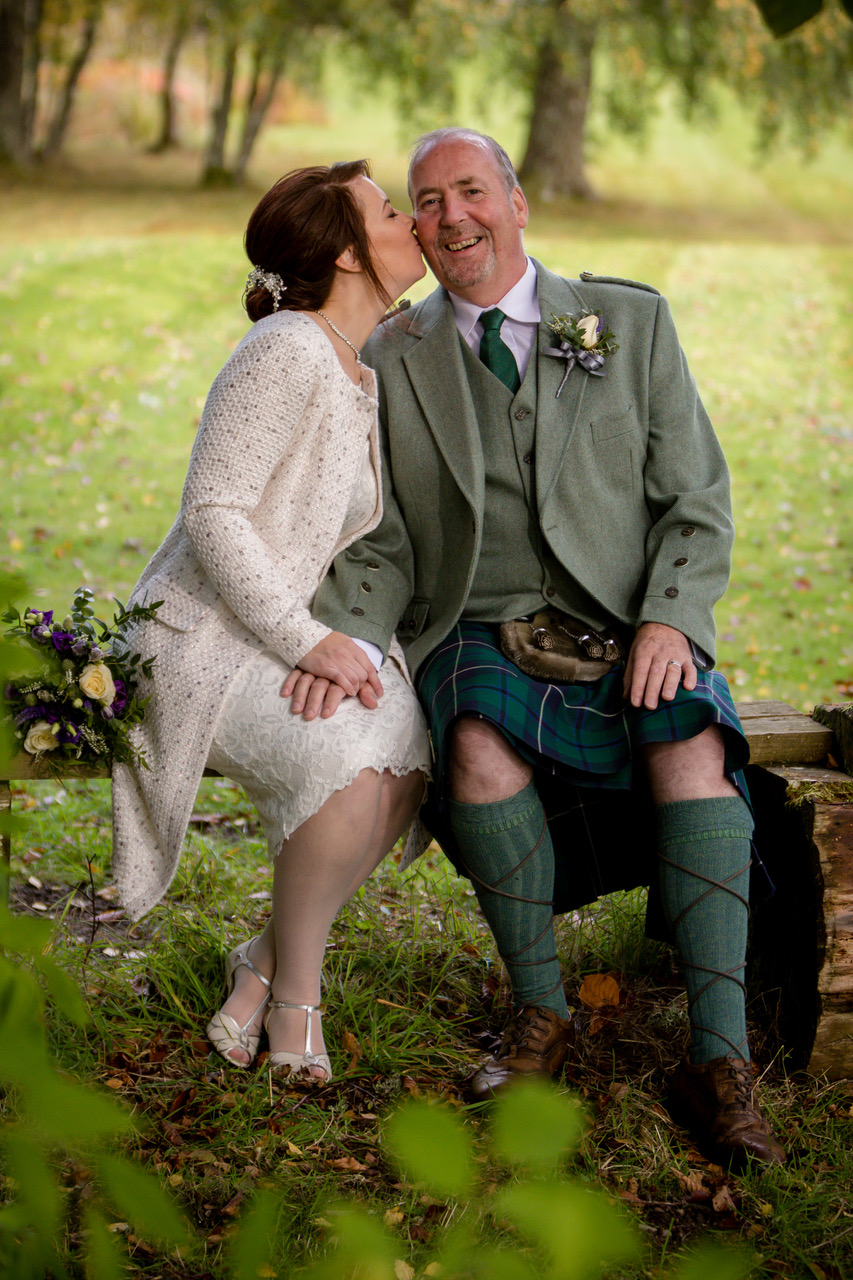 CONSIDERING A WEDDING FOR TWO?

Probably there’s nobody better placed than a couple who have chosen to have a tiny wee wedding for two, to offer words of caution and encouragement based on their experience.  Emma and Alister offered these wise words, “If you go for a wee, intimate wedding for the two of you then you must be aware that your wider family and social circles may feel a bit put out at being excluded. Personally we found that our family and friends were surprised that we'd done it this way, but once we explained what it was about for us, then they totally understood and accepted our decision.  We would encourage anyone who is thinking of having a wee, intimate wedding for two to absolutely to go for it. Our experience was fantastic and exactly what we hoped for.” 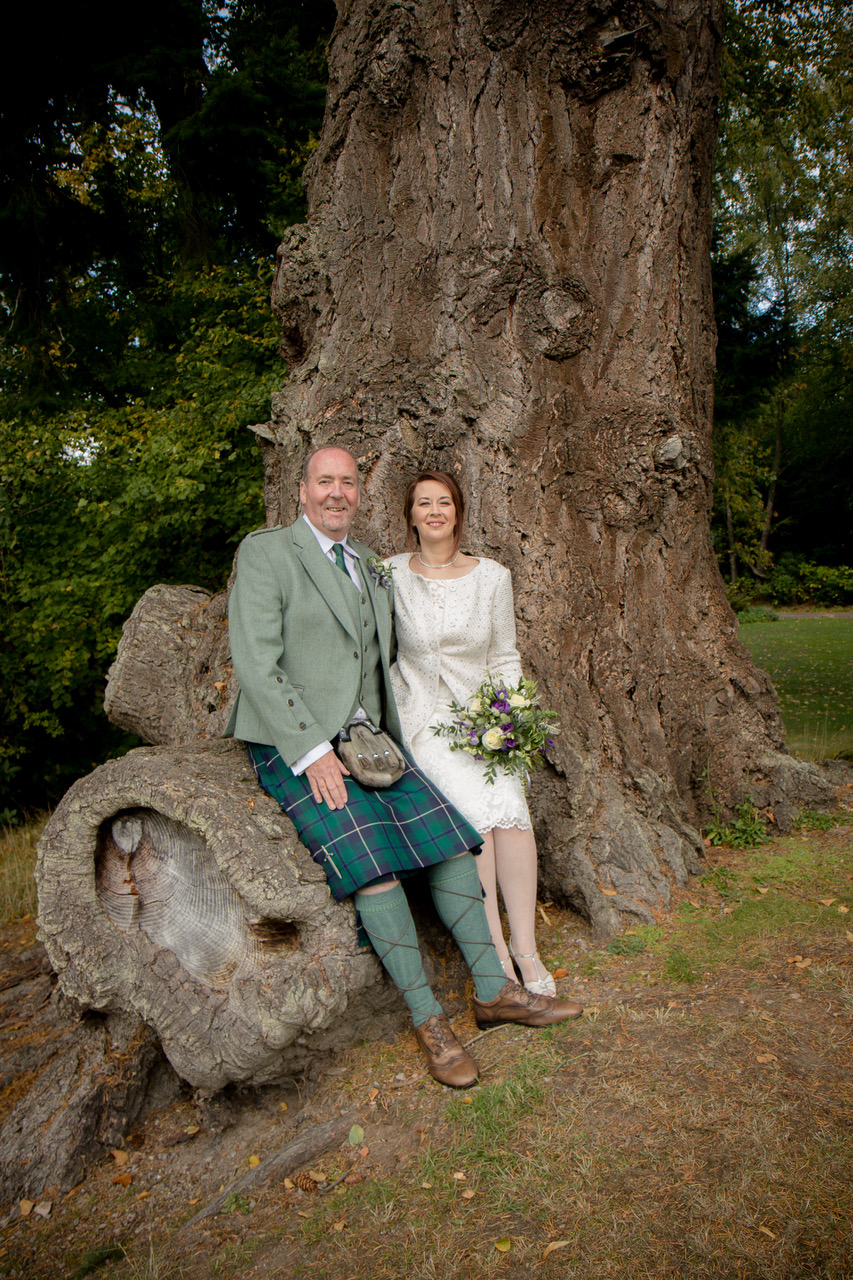 COMFORT AND FINE DINING FOR YOUR ELOPEMENT

I was interested to hear from Emma and Alister if Coul House is as good as it seems.  They said, “We stayed in the Master Suite of the hotel which was amazing - very roomy and luxurious. The hotel staff were all fantastic and couldn't do enough for us from the hotel owners all the way through to the cleaning staff. Nothing was too much trouble. The breakfasts were unbelievable, however a cooked breakfast is not recommended before squeezing into a wedding dress! The evening meals were also fantastic – seasonal and produced to a really high standard. We also enjoyed a spot of afternoon tea with sandwiches and cakes which were freshly baked on site and were just the right size to tide us over 'til dinner.” So top marks go to Coul House. 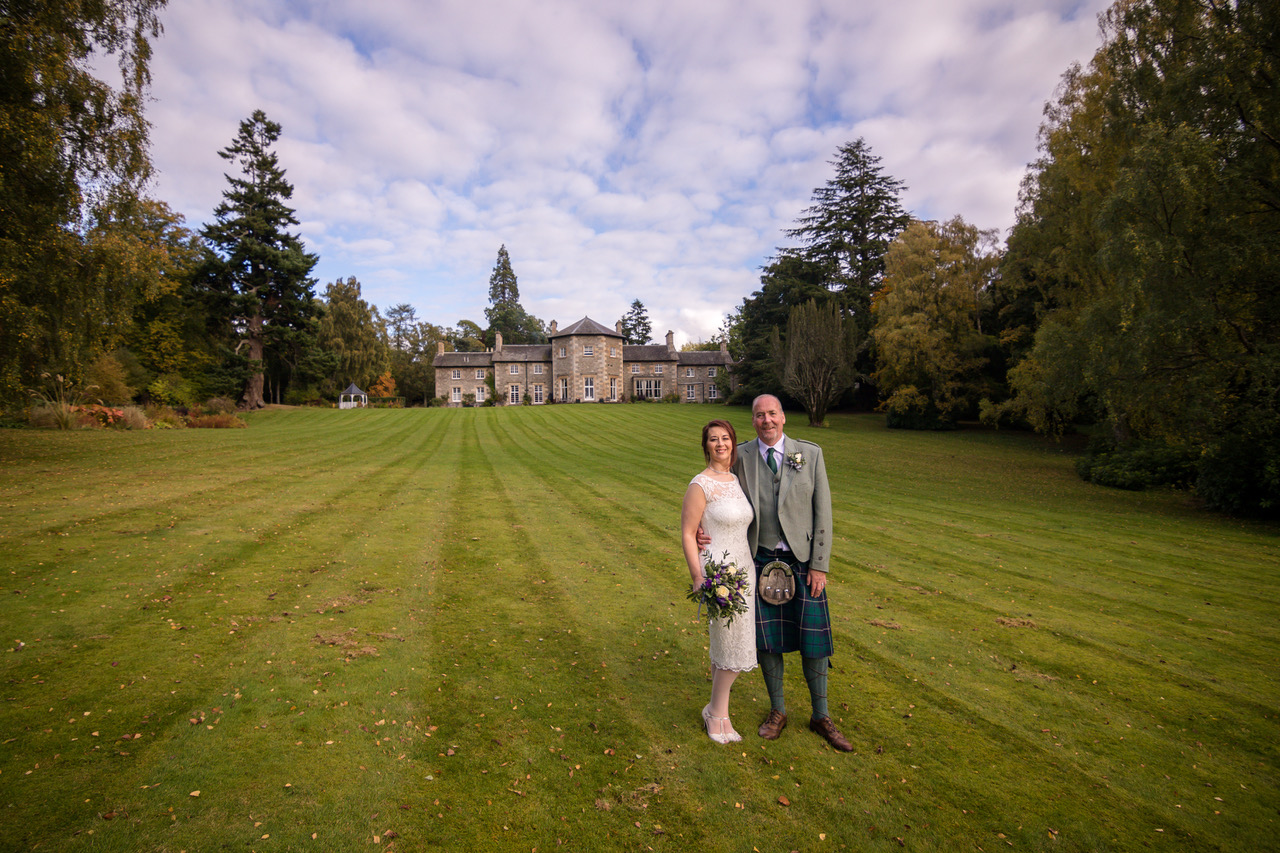 If you are inspired by reading about Emma and Alister's perfect elopement and have questions about eloping or having a tiny wedding for two, we would love to help.  Belladrum Temple and Coul House were a winning combination for them, and we would thoroughly recommend following in their footsteps, however every couple has a different vision for their wedding day.  Whether you would like something with a touch of luxury like they chose, or whether you’d like to be outside in nature, we have all sorts of ideas including something for everyone so please get in touch.