CHANGES TO YOUR ORIGINAL WEDDING PLANS?

Having to re-think your plans for a big, traditional family wedding?  Myraiel and Nathan did just that when they decided to have a wedding for two, and very kindly said Will and I were amazing to work with and that they would love to be featured in a blog, so here it is - Myraiel and Nathan’s Real Life Wedding, held at Duffus Castle ruins near Elgin in Moray, The Highlands. 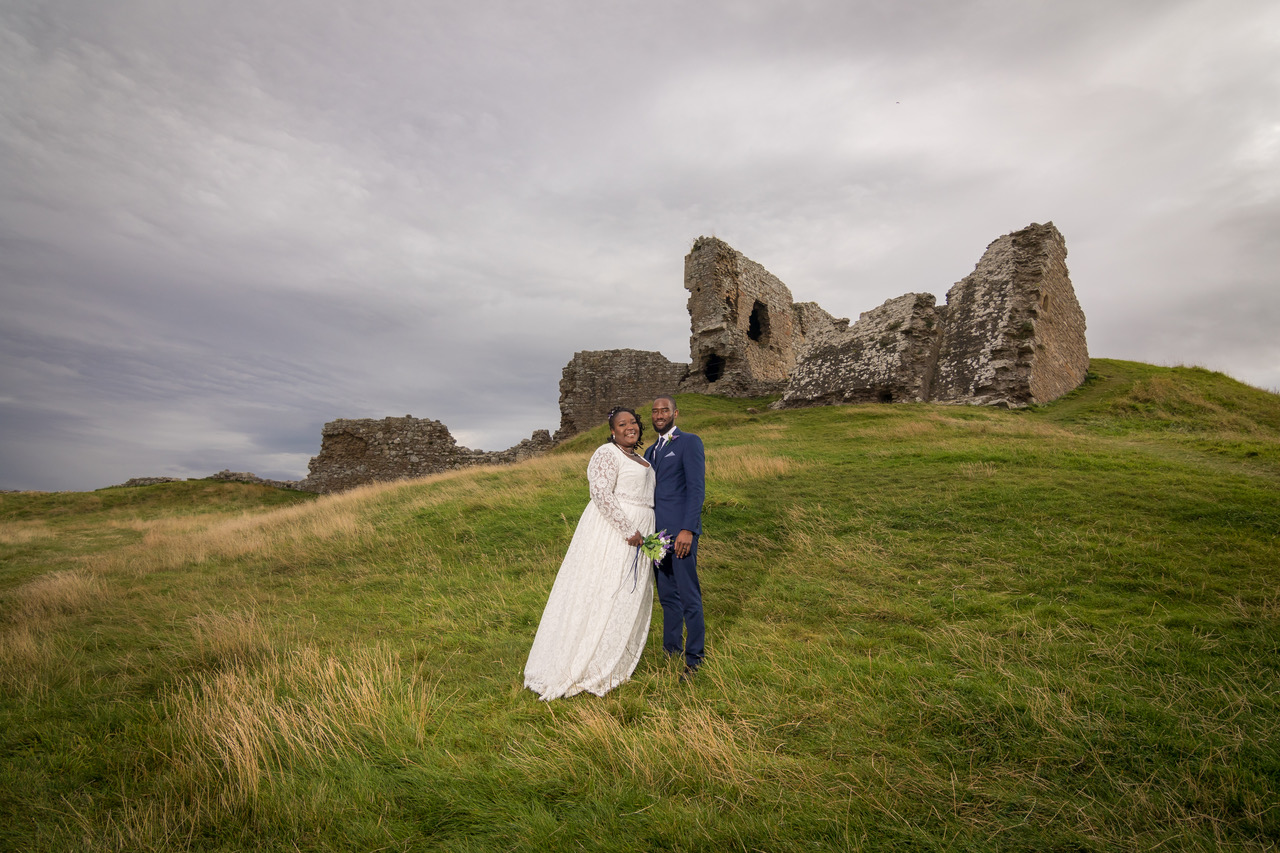 THINKING OF A WEE WEDDING FOR TWO BUT DON'T KNOW WHERE TO START?

When they first enquired about getting married in Scotland just the two of them, Myraiel and Nathan had no idea how to begin or which part of Scotland they were headed for.  All they knew was that they loved travelling and were looking at making things happen during the late summer of Covid, as they had had enough of being apart.  Having met at university in the UK, over their time there they became close friends before friendship blossomed into romance.  Then for a time Nathan was London based and Myraiel returned to her family’s home in The Bahamas and they endured a long distance relationship, but as early as 2019 they had had enough of having a long distance relationship and just wanted to get married. 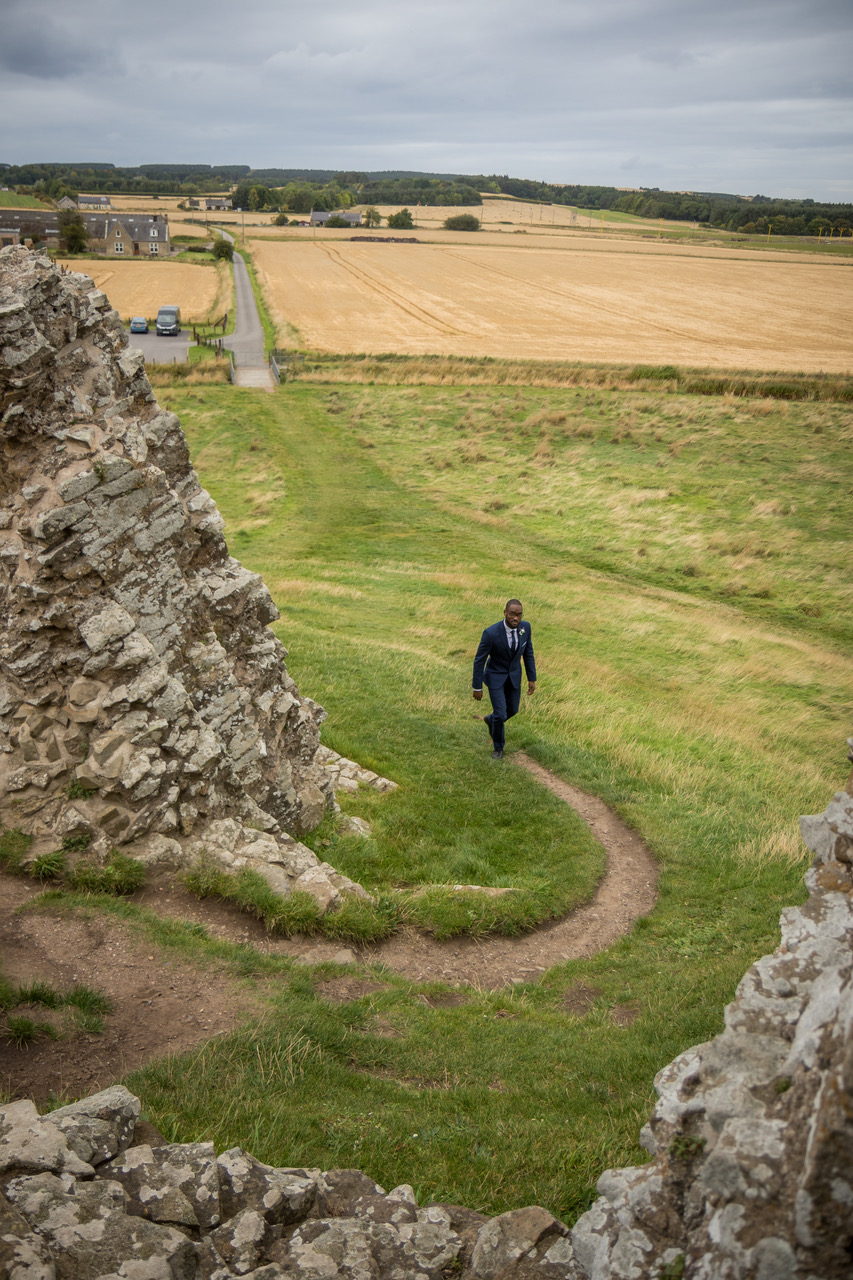 Just before Christmas 2019 when Nathan went down on one knee in Park Guell in Barcelona, making a very memorable proposal, little did he and Myraiel know that getting married in Scotland would be on the cards to add to their special memories.  Ultimately in deciding to marry in such an intimate way they gave up their dream of a big wedding with family and friends, but still, they had an amazing adventure and no regrets in the decision they took to marry this way.

It was hard to know what was possible during the weeks following lockdown.  Though in the beginning Myraiel and Nathan opted to come to Moray in The Highlands more for practical reasons, once they knew what was possible and had chosen a date and a location things started to fall into place easily and move quickly. 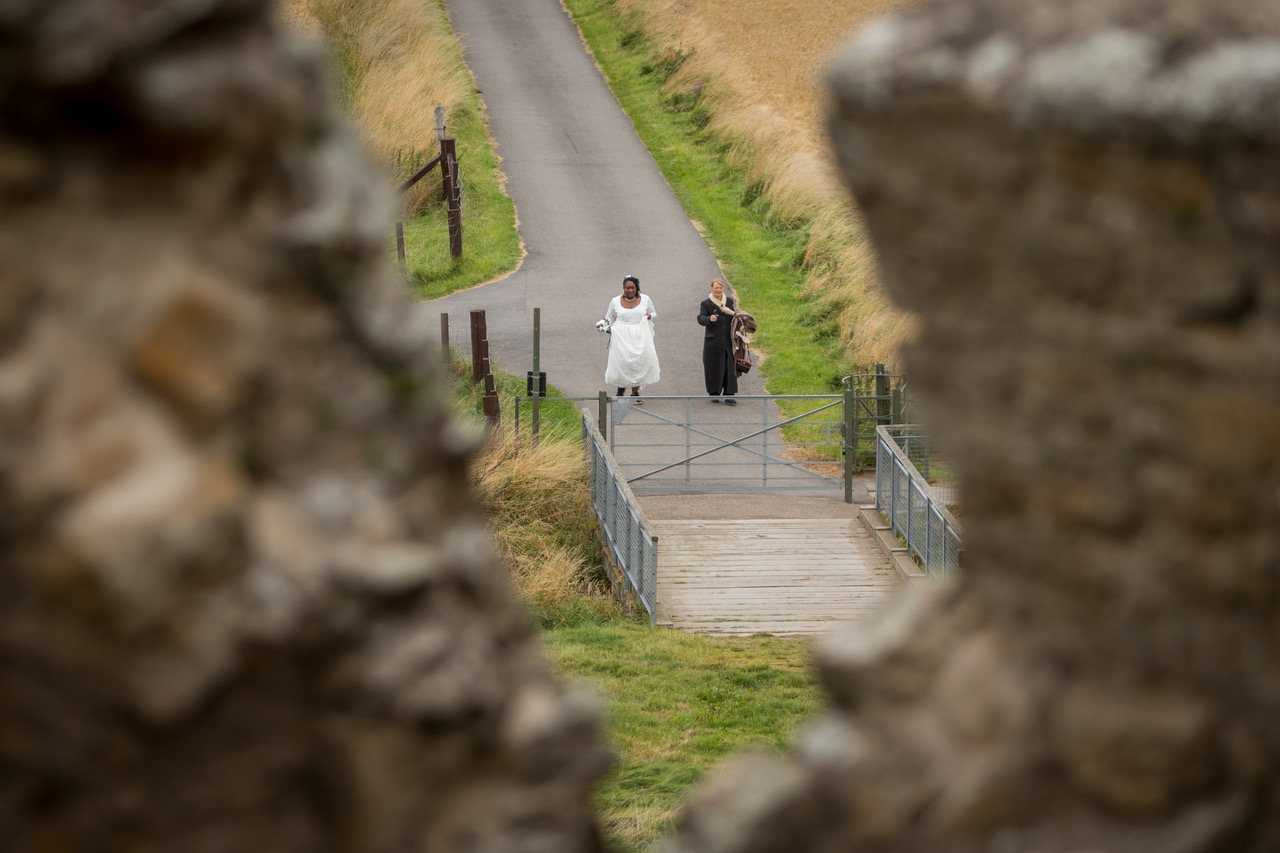 RESERVATIONS ABOUT HAVING A WEDDING FOR TWO?

Did they have some reservations about it being just the two of them?  The short answer is yes.  Myraiel said “In an ideal world, we would have liked our family and friends to join in our day. However, because of the pandemic, this was not possible and Nathan and I did not want to wait any longer to be married. So we came to terms with the idea of an intimate wedding with just the two of us.”

Having come to terms with what was possible - an outdoor wedding for two - Myraiel and Nathan loved the idea of one of the ruined castles close to us, and so a date in September was set and a few weeks later Myraiel arrived into London from The Bahamas to take a two week period for self isolation, in plenty of time for flying up to Inverness.  On arrival into Inverness Nathan hired a car so he and Myraiel had freedom to easily get around, and they drove over to Elgin where they had booked a hotel. 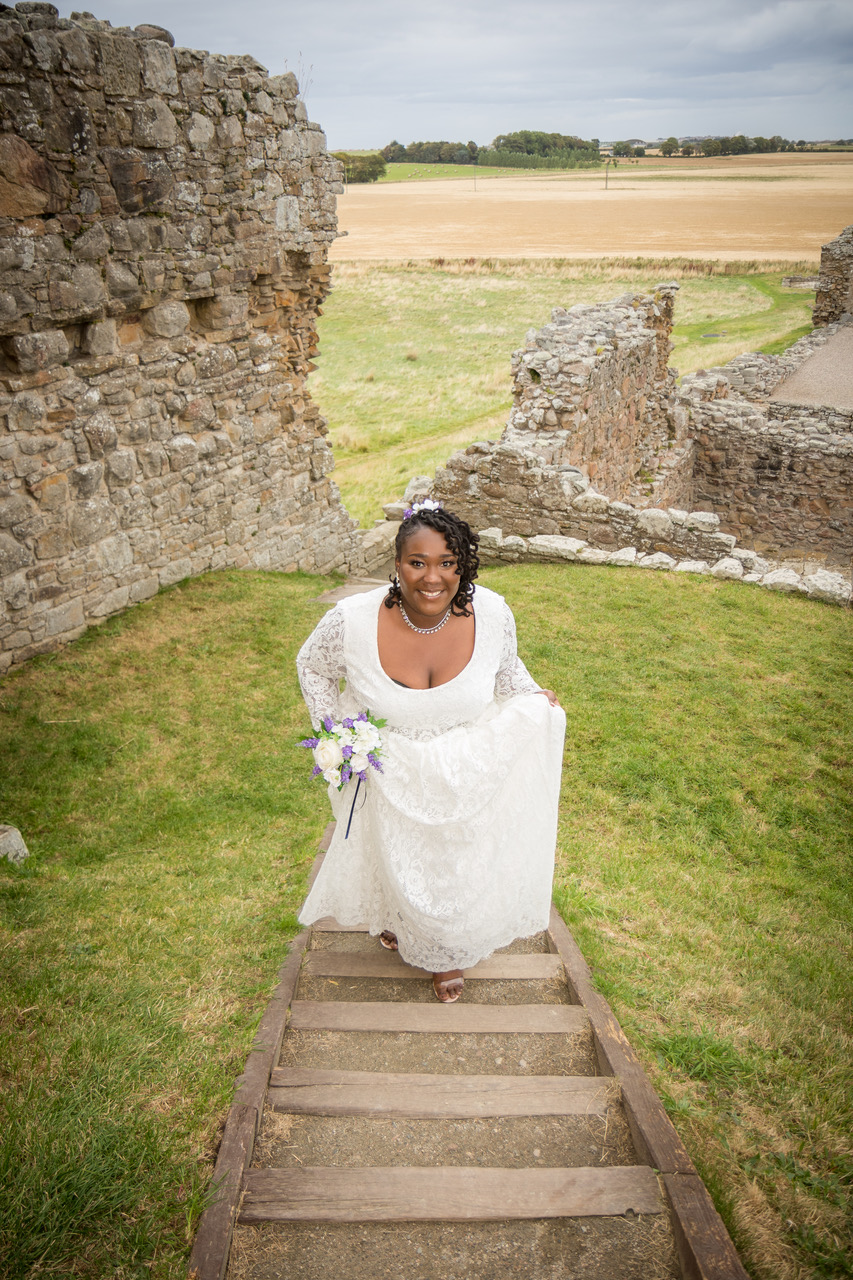 Nathan didn’t have any reservations about having the ceremony at the ruined Duffus Castle without having seen it in real life first, but Myraiel was slightly worried about the condition of the grounds.  She was reassured when visiting for the first time the day before the ceremony and enthused “Upon seeing it for the first time in person the pictures didn’t do it justice. We were blown away. It was absolutely beautiful. I remember feeling so excited!”

Despite not having family there, on the day Nathan and Myraiel felt confident in their decision for it to just be the two of them, and found they felt nervous but also so excited to be getting married finally. Nathan wore a suit and Myraiel wore a wedding dress which she kept secret from Nathan.  She did her own hair and make up. 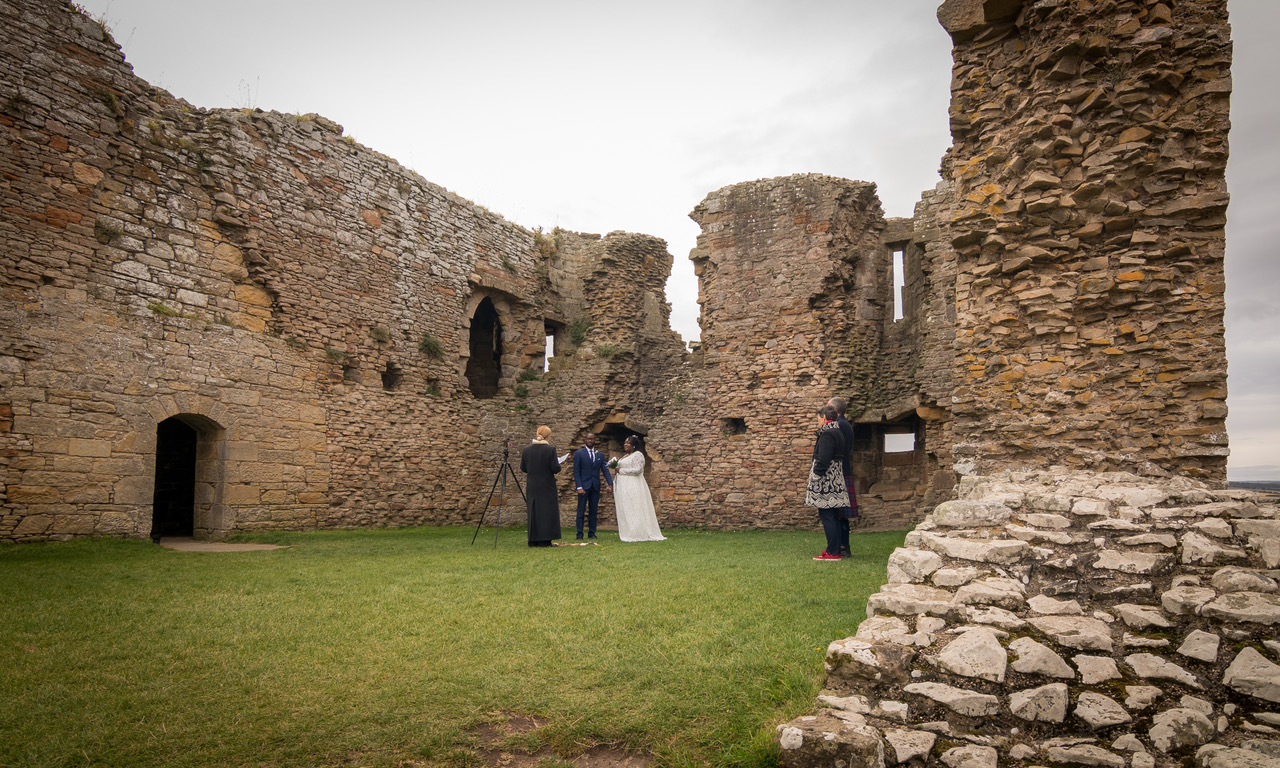 LIVE STREAMING THE CEREMONY FROM SCOTLAND

As she prepared in the morning Myraiel spent time talking with family in The Bahamas.  It was particularly hard to be away from her Dad who would have given her away if she had been having a more traditional wedding.  It just wasn’t possible for him to make the journey – he even explored having a close friend who was London based stand in for him, but the friend wasn’t able to travel either.  It was a disappointment not to have Myraiel's Dad with us, but we had a good signal and were able to live stream the ceremony successfully so that he heard everything, could see us all, and it was the best possible Plan B experience we could manage. 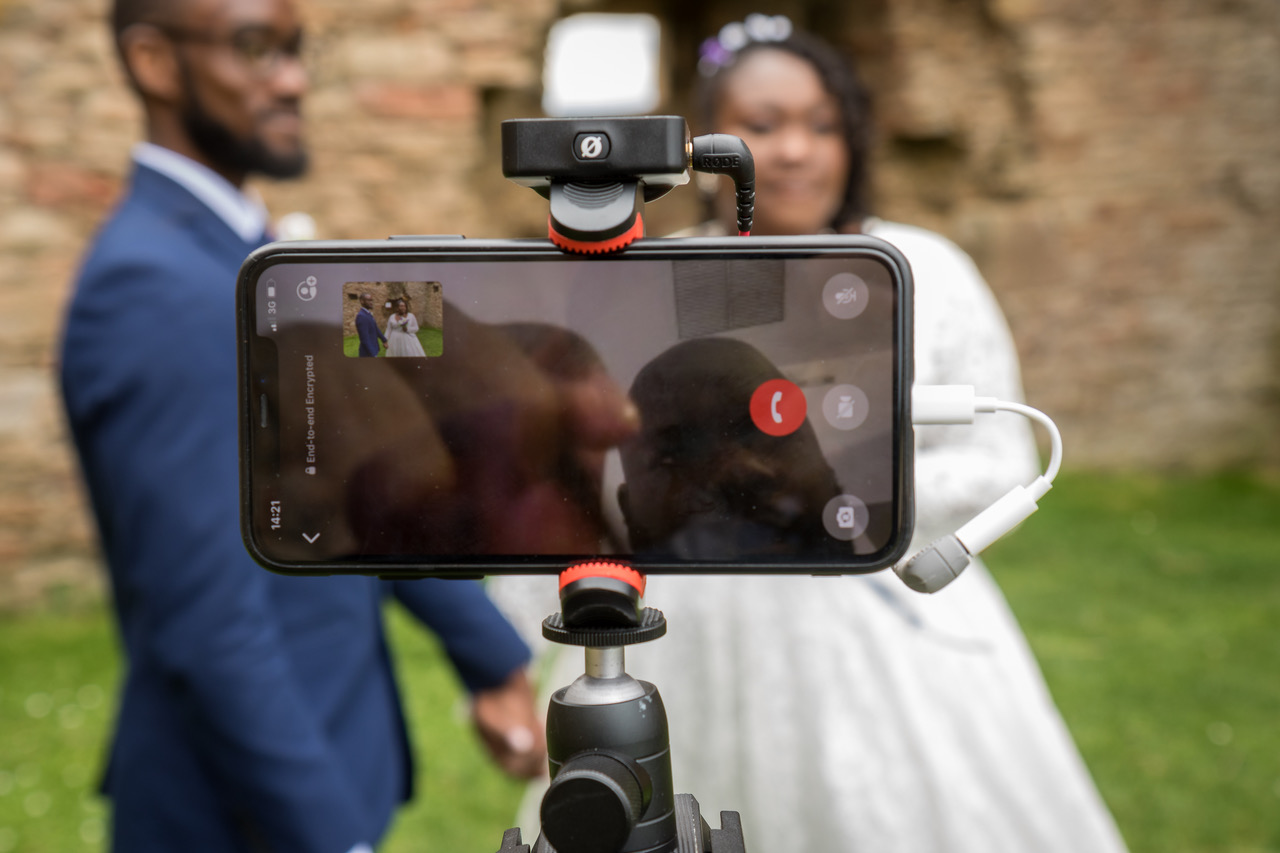 KEEPING SOME OF THE TRADITIONS - THE BRIDAL ARRIVAL

Around midday Nathan left the hotel first and drove to the castle in the hire car, and Myraiel came on her own a little bit later via taxi.  I was there to greet them both individually when they arrived, to welcome them, calm them and reassure them.  As Nathan stood ready in the ceremony spot, with Will to hand taking photos, and our friends Jane and Ian acting as legal witnesses, Myraiel walked up the hill to the castle.  Part of me being on hand was to carry Myraiel’s coat, bag and shoes, so she wouldn’t have them in all her photos.  I guided her with where to walk so that Will could capture her arrival.  Once she had climbed the hill, and before we put on the bridal entrance music, Myraiel changed her shoes – from trainers to get up the hill, to more glamourous heels. 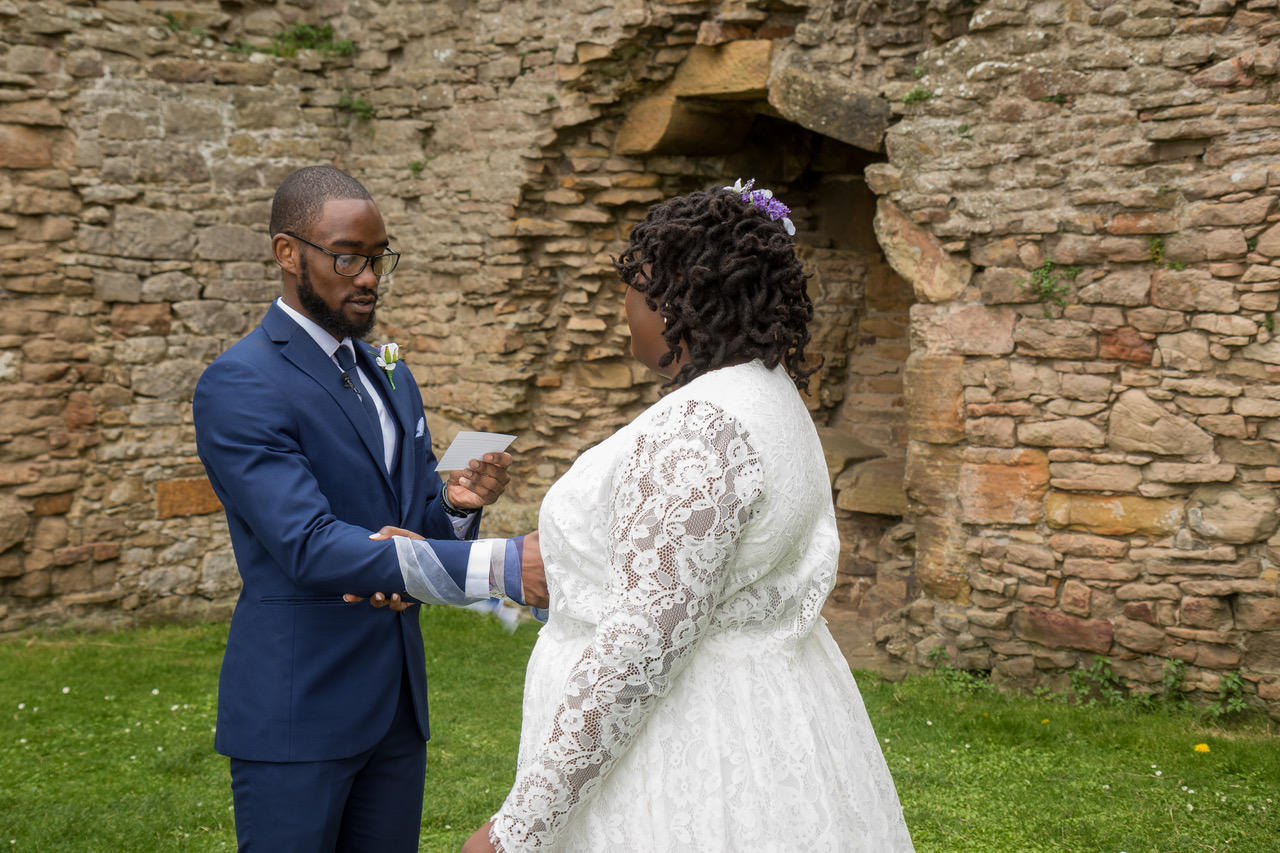 Once Myraiel was in place and we had settled and ensured the live streaming was going OK, we began, with a beautiful poem by Paul Laurence Dunbar ‘Invitation to Love’ – this was chosen by Myraiel and really set the scene. Myraiel and Nathan had differing beliefs, and it was important to Myraiel to be able to honour her faith with a prayer she both wrote and spoke as part of the ceremony. Words about marriage, and a little acknowledgement of their journey together so far formed the wedding address and led up to a simple handfasting and exchange of vows and rings. 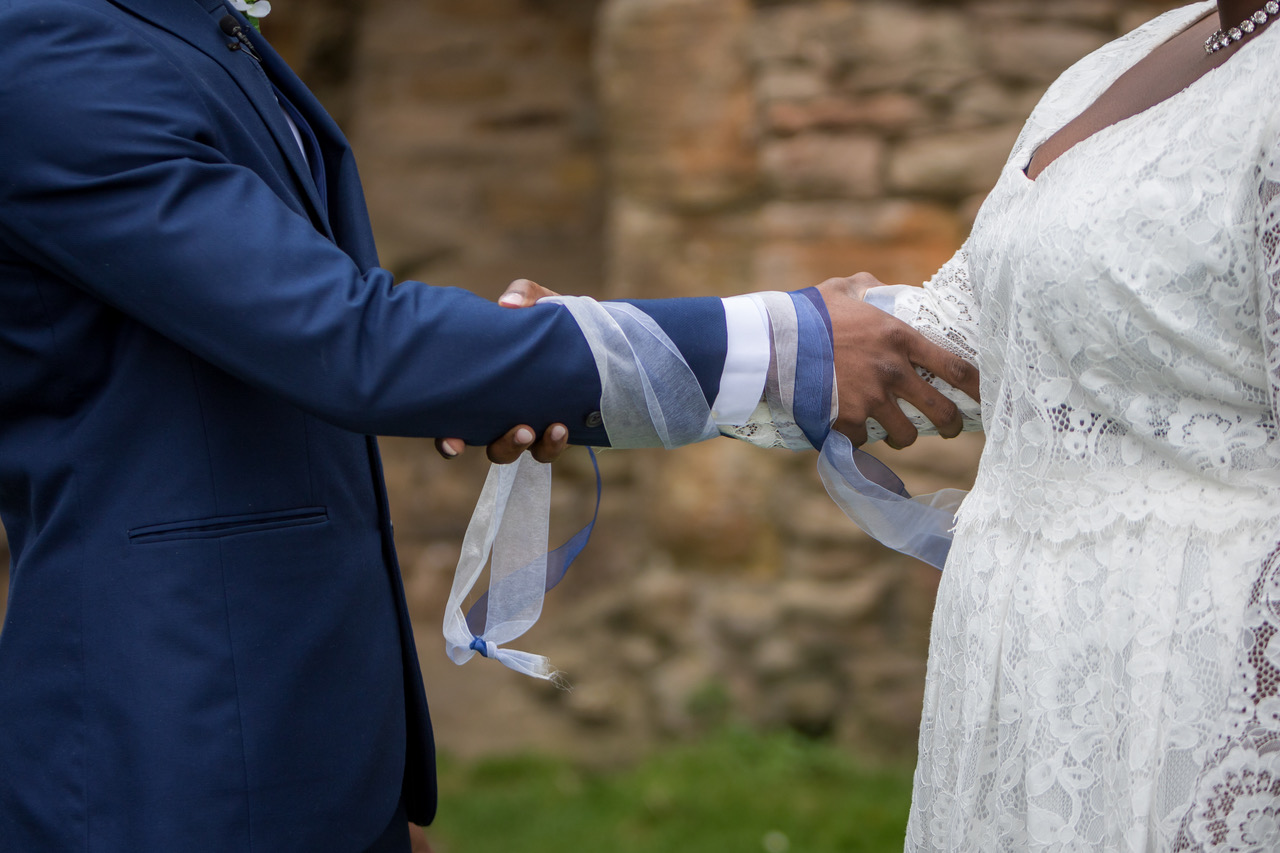 PERSONAL VOWS AND A DANCE!

Both Myraiel and Nathan had prepared surprise vows for each other that they each heard for the first time in the moment.  Before we pronounced them husband and wife, Myraiel read another poem she had written. And the ceremony closed with a Native American blessing, and sharing a drink of Scotch whisky from the quaich, and a wonderful upbeat song that Myraiel and Nathan danced to. 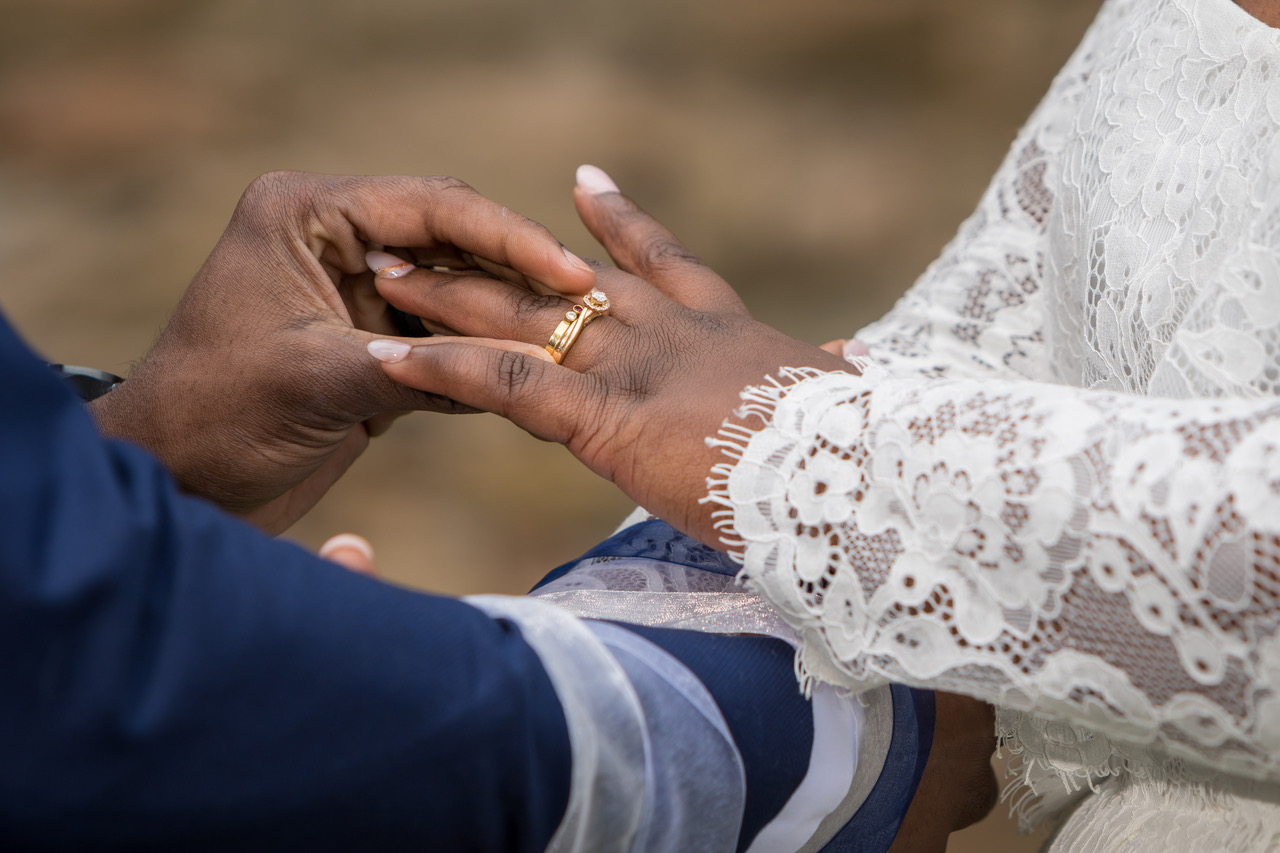 HAVE YOUR WEDDING YOUR WAY

When I asked Myraiel to say how the ceremony had been on the day, she said “Marriage is down to the two people. I would say to other people, do not be afraid to ensure that the ceremony is how you both want it and no one else. It is a day you will remember, a union between you and your partner.” 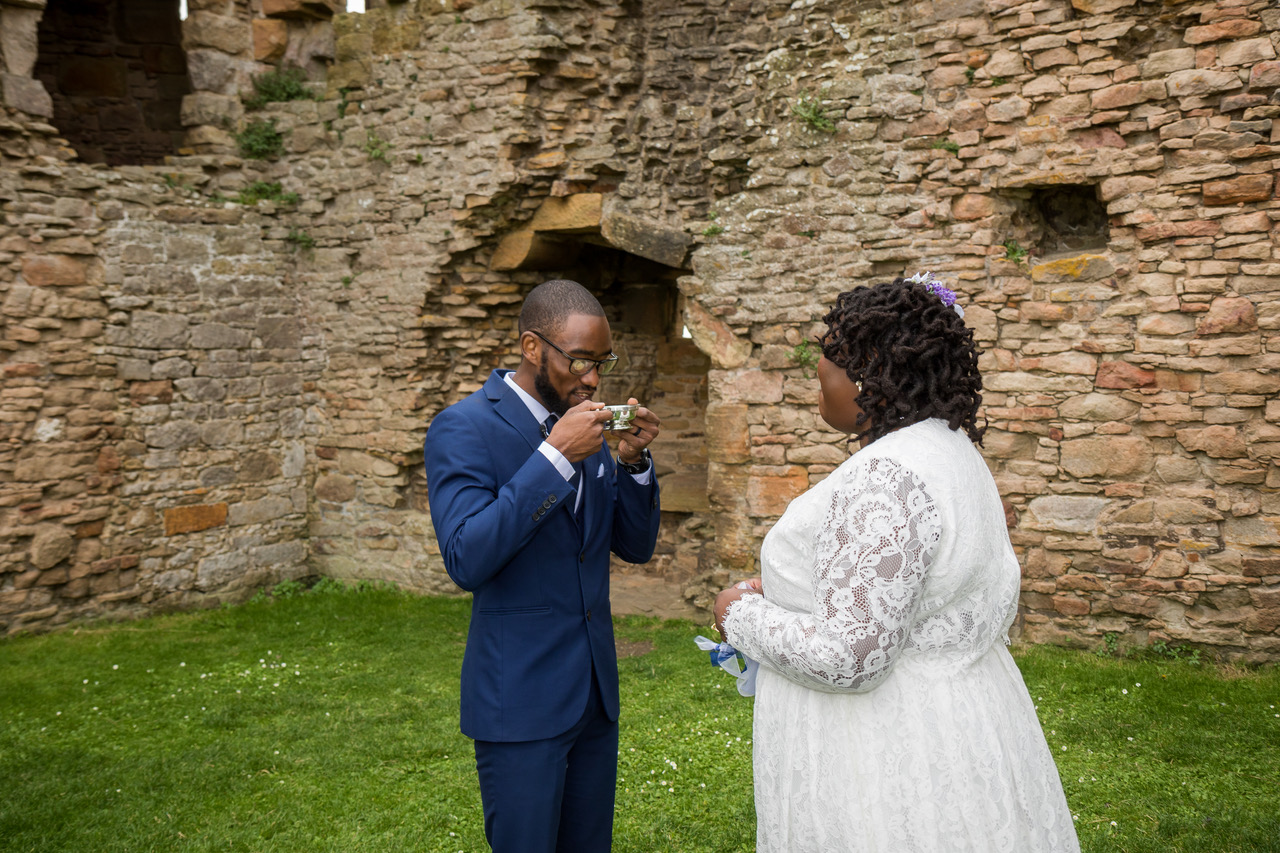 THE INTIMACY OF A WEDDING FOR TWO

Myraiel and Nathan made the most of the freedom and flexibility available to them through their decision to have an interfaith ceremony in Scotland, and had input into every aspect of their ceremony, so it’s no surprise they were happy with the result.  Their only regret was that they didn’t record the ceremony. They said “The ceremony was so authentic and beautiful we wished we had a video of it to share with our friends and family. We think it was only able to be so authentic because we did it this way with just us two.” 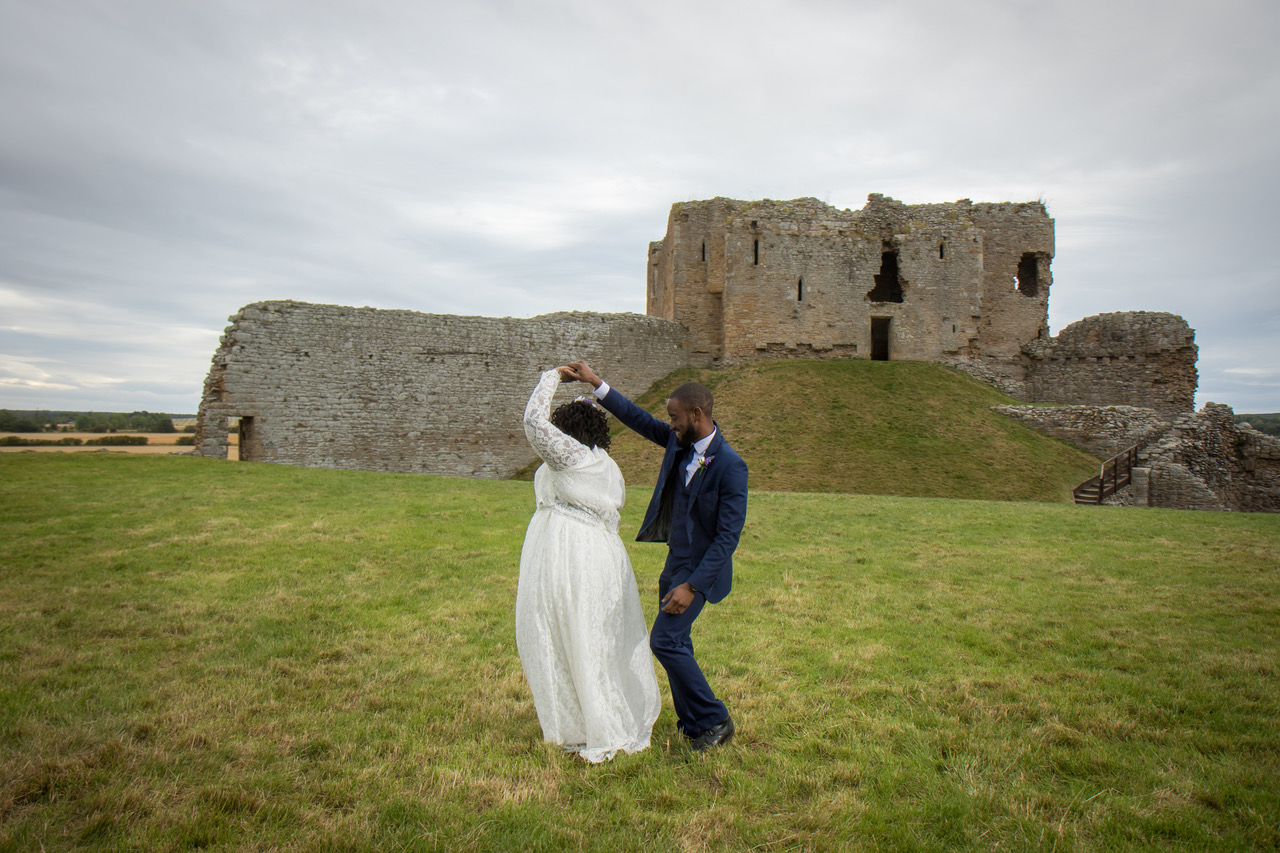 MR AND MRS MASKS TO HAND

Photos around the castle followed the ceremony before Nathan and Myraiel headed back to their hotel to relax and enjoy a nice dinner out in a restaurant.

Then around a week after the date of the wedding Will had all the edited images ready in a password protected online gallery so that Myraiel and Nathan could download all their images and share the gallery with family and friends.

Myraiel had ordered wedding masks which thankfully they didn't have to wear as we were outside, but the masks made for a fun photo. 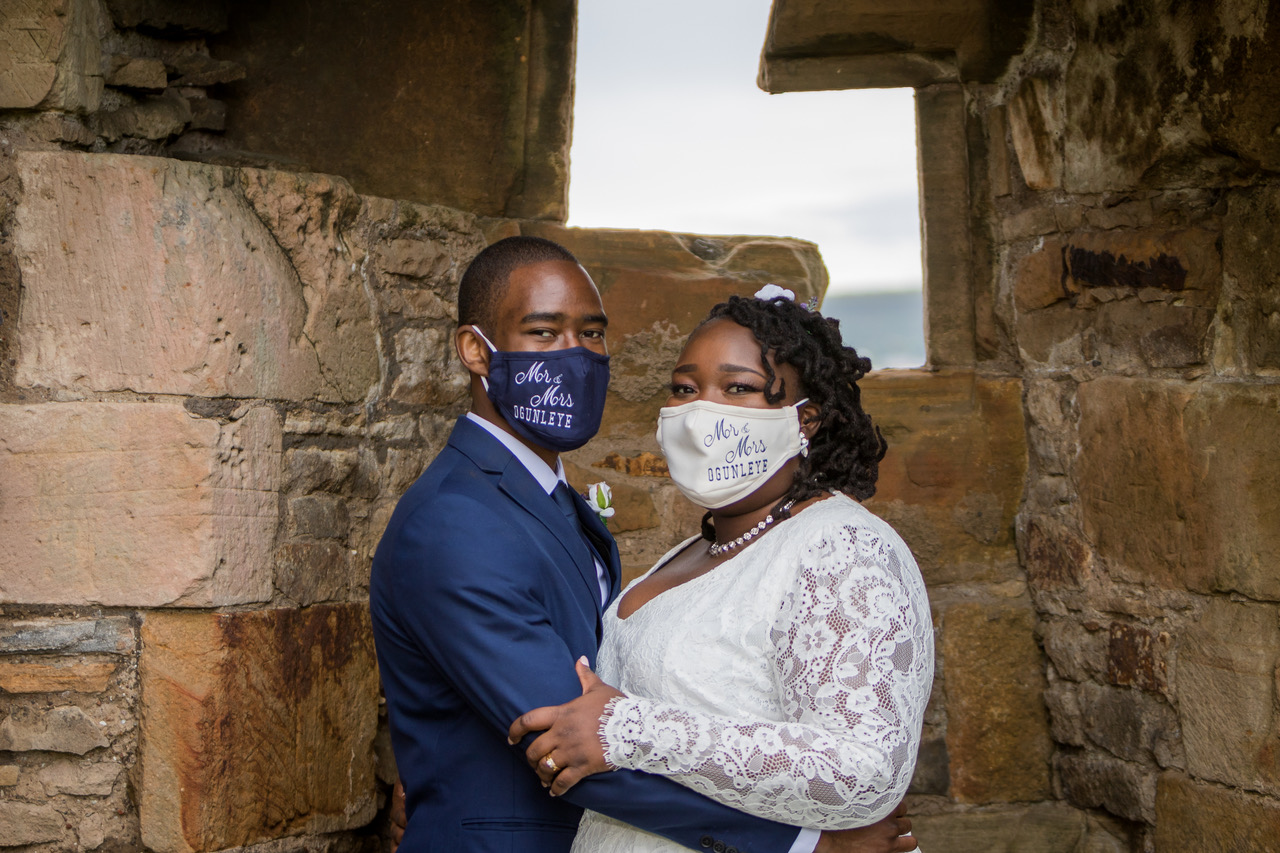 Myraiel and Nathan honeymooned in Scotland too and found that some tourist attractions were closed, but they did try archery, and the zip park adventure that we recommended, and reported that both were great fun! They also went to the Aberlour Whisky Distillery and a transport museum. They did a lot of driving, just relaxing and exploring the area and taking in the lovely scenery.  The only let down to their whole trip was the hotel, which hadn’t let Myraiel and Nathan know beforehand that they were operating only as a bed and breakfast. 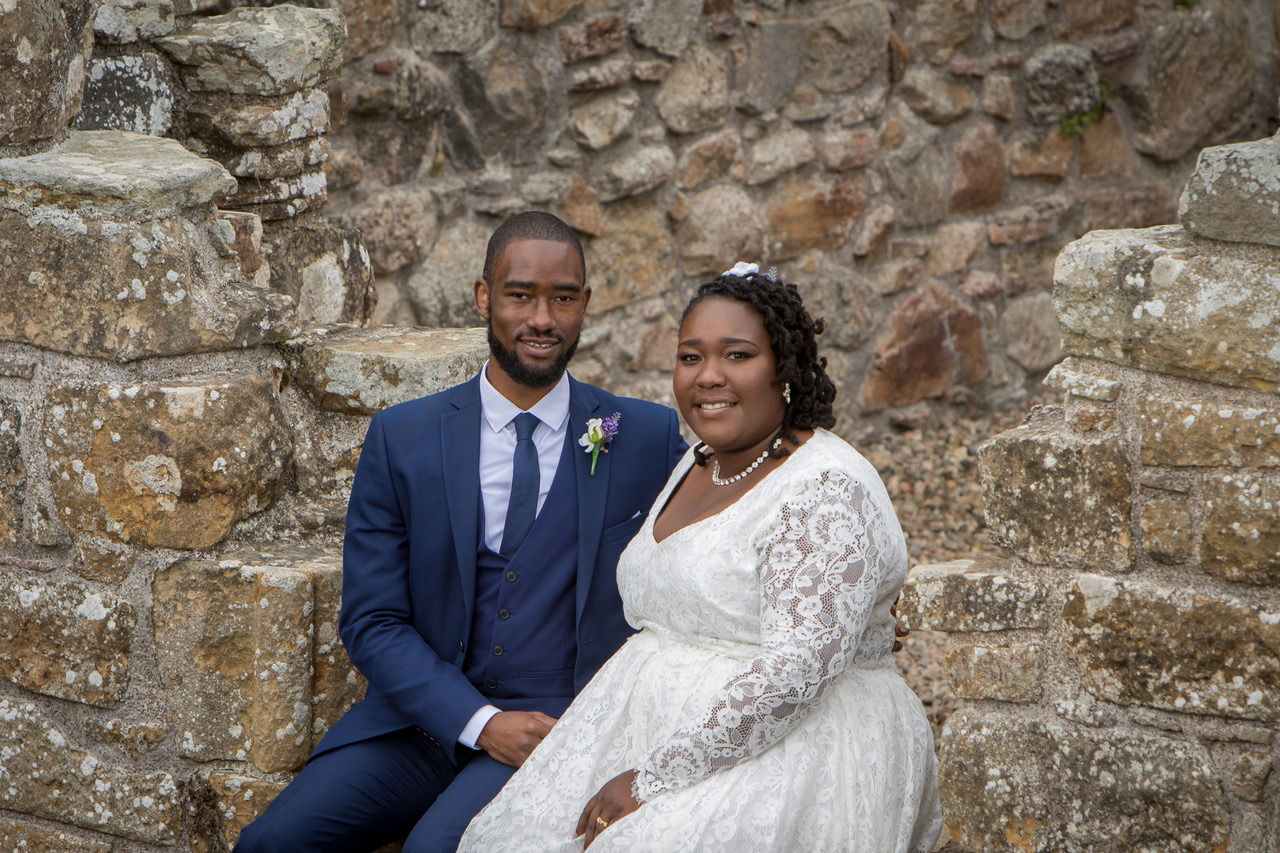 It was our great pleasure to give a little bit of practical help to Myraiel and Nathan including suggestions for where to hold a ceremony, as well as to create and hold the ceremony and take photos, and it was very moving to have Myraiel and Nathan take such an active part in all the decision making and in the ceremony on the day.  Looking back with delight Myraiel said “We are completely content in our decision to have a wedding for two. We had such a great experience, looking back we would have not done it any other way.”